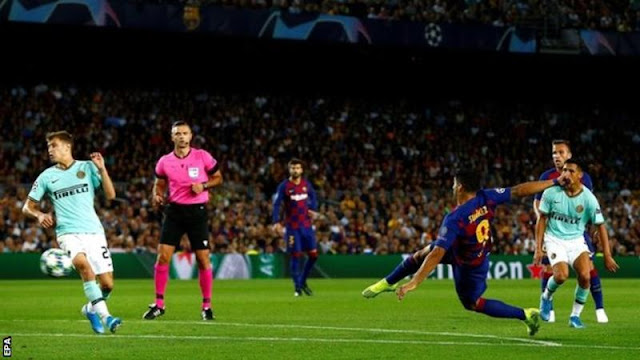 Luis Suarez scored a fine double as Barcelona came from behind to beat Inter Milan in the Champions League.

Suarez levelled with a wonderful volley from Arturo Vidal's cross.

Then Lionel Messi, on his return from an injury, found Suarez - whose first touch took him past defender Diego Godin - and he blasted in the winner.

Those were Suarez's first two Champions League group goals in over three years.

Barcelona, who are unbeaten in 33 Champions League home games, are level on four points with Borussia Dortmund, whom they drew 0-0 within their opening game, at the top of the table.

Barcelona are only fourth in La Liga, having lost two of their opening seven league games. If they had been beaten by Inter, it would have been the first time ever that neither Barca nor Real had won after two Champions League games.

And for the first half that really looked on the cards. Alexis Sanchez set up Martinez for the opener as the striker held off Clement Lenglet before sliding a shot home. He was only denied a second by Barcelona's keeper - and then Antonio Candreva had a goal rightfully disallowed for offside.

But Barca were much better in the second half and Suarez's acrobatic volley put them ahead - his first goal in his last 16 group games.

And he had his second with a fine two-touch goal after Messi had run 40 yards before finding the Uruguayan.

It was the first time Messi had managed more than 45 minutes this season following two injuries and he was lively, although far from his best - forcing Samir Handanovic into three saves.

Inter, who had been unbeaten in all competitions since Conte arrived in the summer, are bottom of the group on one point.