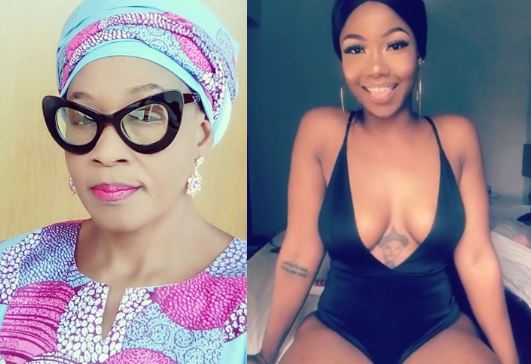 The reality star was at the receiving end of another lash out from the controversial journalist over her video with Twitter CEO, Jack Dorsey.

Reacting to this, the blogger called Kemi Olunloyo a disgrace for always finding it easy to use the reality star for her clout chasing adventure.

Cutie Juls urged Tacha to be proud of her accomplishments at her young age and ignore the hate she is receiving.

Dear #Tacha, you know what they say about respecting old people in our society? Even when it’s obvious the person is acting like an unbalanced mental person, you still have to keep your cool and not lash out to them.

I want you to believe in yourself. At 23, you have achieved what Aunty Kem Kem could not achieve even with all the money at her dad’s disposal. You are just but the daughter of a commoner who has strived and still striving hard to make a living for yourself and your parents. Kemi, was sent to school in abroad at the expense of the poor Nigerian tax payer but came back with?. I’m sure the older women in your family love you and they are proud of you because nothing you will do can amount to the shame and embarrassment Aunty Kem Kem is giving her family right now. At her age, she is using you to obviously clout chase. It’s unfortunately sad but hey, we can’t throw her away. She is part of society. And she will forever remain in our history as the former politician’s daughter who was sent abroad to study only to return back to Nigerian full of hate because she missed all the usefulness of her prime age. There was no single time Aunty Kem Kem had ordinary serious boyfriend in her life so picking on these young girls Chioma, Toyin, Tacha etc is justified in her books. Aunty Kemi, how can you stoop so low by trolling a girl your children’s age? Why am I not surprised? You trolled and bullied #Seyilaw’s daughter when she was barely one. Bow your head in shame, woman!!

Pharmacist indeed. You are a huge disappointment. At your age you are here clout chasing smh. All your father’s political affluence and American accent could but only earn you the position of a clout chaser on IG? Gosh! . Seriously? Wow! Linda the daughter of an ordinary citizen is breaking deals back and forth with the same job you claim you even started in USA with Top American celebs and politicians. Aunty Kemi, use your head! #awordtothewise #cutiesopinion