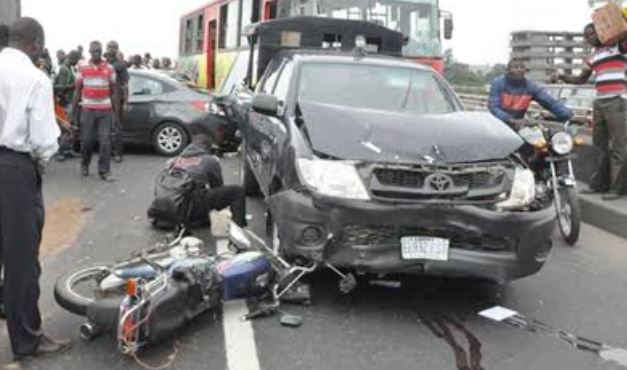 Three persons were on Tuesday morning killed and two others injured in an accident at Ijanikin, along the Badagry Expressway in Lagos.

The accident which occurred around 12:30am was said to have been caused by reckless driving.

It was gathered that a motorcyclist carrying two passengers and attempting an overtake, got crushed by an oncoming 40ft containerised truck that was on top speed and moving against traffic.

“The rider and the passengers died on the spot. Two people were injured.

The truck damaged about five vehicles parked in a mechanic workshop at Ketu Bus Stop, Ijanikin.

“It also hit an electric pole, climbed several kiosks before halting on the roadside,” said a witness Chioma Ogbonna.

According to the workshop owner Kamoru Kajola, the truck driver and his motor boy were saved from being lynched by policemen from Ijanikin Division.

He said the Divisional Police Officer (DPO) Sunday Ayeni received a call about a fatal accident involving a truck and a motorcycle with three passengers.

“The DPO raced to the scene along with some of his men. On arrival, he discovered that a mob has gathered and descended on the driver. The DPO rescued the driver and his motor boy. The mangled bodies of the deceased persons were evacuated to the morgue while he tried to calm nerves.

“Preliminary report showed that the driver of the truck was driving against traffic and unfortunately he ran into the motorcycle carrying the three persons who were heading towards Agbara.”