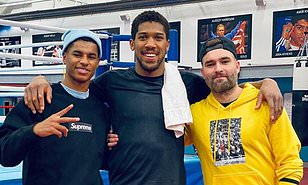 The Manchester United striker will face Sheffield United on Sunday afternoon. Joshua is preparing for his showdown with Andy Ruiz Jr on December 7

Marcus Rashford showed off his skills as he visited Anthony Joshua at his Sheffield training camp ahead of the heavyweight's rematch with Andy Ruiz Jr.

Rashford, who will be back in Sheffield on Sunday when his Manchester United side face Sheffield United at Bramall Lane, made the trip to meet Joshua and personal trainer Jamie Reynolds.

The Manchester United striker posed with Joshua before displaying his neat footwork by doing several kick ups alongside Reynolds.

Reynolds wrote on Instagram: 'Doing it on a cold Wednesday night in Stoke is easy.... what I wanna know is can you do it in Air Force ones with a tennis ball @marcusrashford.

'Keeper and defender needed for a new start up 5 a side team in Sheffield. Keeper must own gloves and can't be scared to dive on a concrete pitch. Defender must be willing to wash the kit every other week @marcusrashford @anthonyjoshua.'

Joshua has under two more weeks of preparation for his showdown with Ruiz Jr as he looks to bounce back from his June 1 defeat by the Mexican-American.

The boxing world was stunned when Joshua lost his unbeaten status at the hands of Ruiz Jr at New York's Madison Square Garden.

Joshua was knocked out in the seventh round which handed Ruiz Jr the WBA (Super), IBF, WBO and IBO belts.

The 30-year-old will look to win back his titles as he takes on Ruiz Jr at the Diriyah Arena in Saudi Arabia.

Joshua has vowed to show Ruiz Jr how great he is when they come head-to-head six months after their first meeting.

'I'm fighting the best man in the world now. I'm going to whup him, and show how great I am,' Joshua told Sky Sports.

'They think he's so great, so when I beat him I want everybody to bow to my feet and tell me how great I am.

'I couldn't beat Ruiz Jr before and get the credit I deserved. You saw me in the ring [before the fight] - I wasn't fighting King Kong, was I? I didn't have that mindset.

'Apparently I'm fighting the quickest hands and the best fighter in the division. So once I beat him I want everybody to bow to me.'