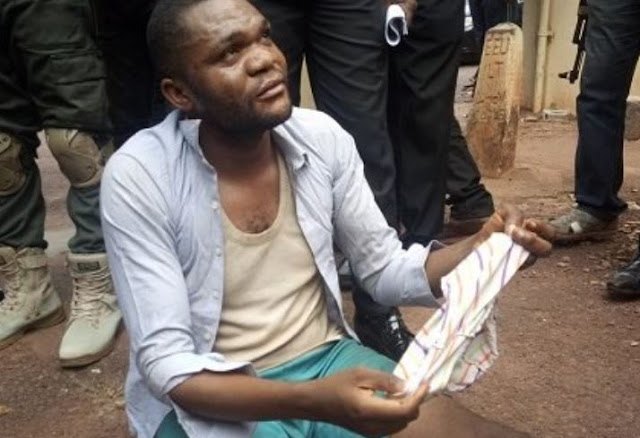 The Enugu State Police Command, Tuesday, paraded a self-acclaimed pastor, Sunday Egbo over his alleged involvement in the rape of a female member of his Church.

The alleged rape led to his arrest and subsequent recovery of a small coffin, multiple female pants and braziers from his house.

It was gathered that the victim, name withheld, had gone for prayers, during which the pastor had forceful carnal knowledge of her, after keeping her for several hours.

The Police Commissioner said Samuel returned “at about 2300 hrs and dragged her to his room, brought out a magic stone and threatened to kill her if she raises alarm.”


He further stated that after the rape, “he seized her pant; brazier and brought a small bottle and wanted to insert it into her private part. She struggled and ran out naked.”

Speaking to journalists, the pastor said that he procured the coffin and other items from a native doctor in Kogi State, with the hope of making money and attracting favour.

While admitting to raping the female member, the pastor said.

“I wanted to have sex with her but she refused. So, I raped her.

“I paid the native doctor N200,000, to get the coffin and the flute. He told me to do certain things, after which I will get a Ghana-Must-Go bag full of money in my room.

“But after two weeks, the money did not come as the native doctor told me.”

He left advice for Nigerians and other men of God.

“I believe I was deceived. So, I’m advising other men of God to follow the ways of God. There is no need seeking power and favour in wrong ways.

“I also advise Christians to be mindful of the places they go for prayers,” he said.

Also paraded was an Inspector of Police, Maaling Peter of Rijana Police Station, Kaduna State, and two others for alleged kidnapping.

The CP assured residents of the Coal City State of adequate security, with a warning on all criminals to turn a new leaf or leave the State.