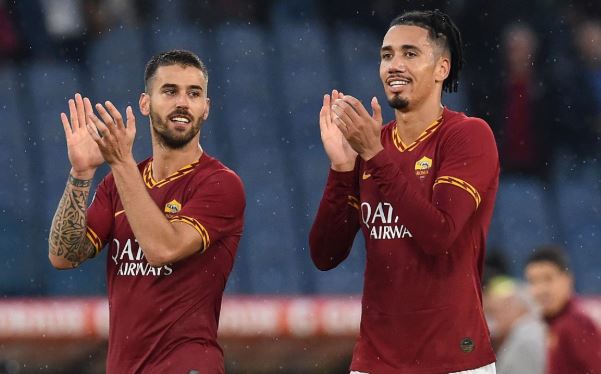 Roma are reportedly ready to increase their offer to £13million for Manchester United defender Chris Smalling after their opening bid was rejected.

Smalling, who joined on loan in the summer, has impressed at the Stadio Olimpico and the Italian side are preparing a new offer to make the deal permanent.

According to Corriere della Sera, Roma sporting director Gianluca Petrachi is working to complete a deal as soon as January, although United are looking for at least £17m.

The centre-back departed after the £80m signing of Harry Maguire from Leicester City in the summer.

According to Il Tempo, Smalling has urged his agent to get the deal done with rumours of a contract until 2024 to be signed. He has made 11 appearances in all competitions this season, scoring twice as Roma sit fifth in Serie A, 10 points off leaders Juventus.

The Italian side face competition for the defender with fellow Serie A teams Juventus and Inter Milan also interested in a January move.

In Sunday's 3-0 win over Brescia, Smalling scored and added two assists as he picked up the man-of-the-match award.

Should Smalling return to Old Trafford, he will find it tough to break into the starting eleven with Maguire, Victor Lindelof, Phil Jones, Axel Tuanzebe and Marcos Rojo all fighting it out for selection.

The 29-year-old cost the Red Devils £12m back in 2010 and made over 300 appearances before being allowed to leave in the summer.

This is personalised for you. Manage these settings at the bottom of this page.

Ole Gunnar Solskjaer will be keen to increase the funds available to him in the next two transfer windows so it appears likely that Smalling's United career is nearly over.


United are ninth in the league after drawing 3-3 to Sheffield United at the weekend, nine points off the top four after what has been an inconsistent start to their campaign.

Should Smalling complete a move to Italy, United will reportedly look at the possibility of signing Real Valladolid defender Mohammed Salisu.