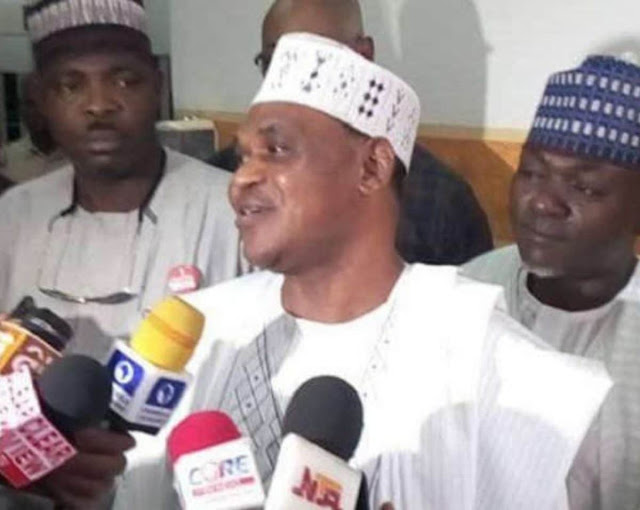 The candidate of the People’s Democratic Party (PDP) in the November 16 Kogi State governorship election, Musa Wada, has described the election as a coup against the people.

Wada, at a news conference in Abuja on Monday, vowed to challenge the victory of Governor Yahaya Bello at the election petition tribunal.

Bello won on the platform of the All Progressives Congress (APC).

The PDP candidate said the overwhelming majority of the people of Kogi state have also rejected the conduct and outcome of the election.

Wada said, “It is clear to all that there was no election on Saturday, November 16th 2019 but a declaration and execution of war against the people.

“What happened in Kogi was an organised war against democracy; coup against the people and seizure of power through brigandage and the barrel of the gun with members of the police and other security agencies coordinating the stealing of people’s votes.

“The police aided armed APC thugs to invade polling units with impunity, shoot and kill voters and carted away ballot boxes to government facilities where results were written in favour of APC and handed over to INEC (Independent National Electoral Commission) to announce against the will of the people.

“Police helicopters were used to attack polling units, fire tear gas on voters and provided cover to APC hoodlums and policemen who brutalised the people of Kogi state and stole their mandate.

“The APC turned our state into a theatre of war. No fewer than nine innocent Nigerians were killed. Many more were maimed and injured by the APC in their desperation to seize power at all cost.

“It is therefore distressing that INEC went ahead with a shameful collation and declaration of fabricated results despite the glaring disruptions that characterised the shambolic exercise”.

Wada accused INEC of cancelling votes cast for the PDP in the party’s strongholds subtracted from PDP votes in many other areas and padded the votes of the APC to give a semblance of victory to APC.

He said the people of Kogi were horrified, brutalised and dehumanised during the exercise, adding that there have been sweeping across the state following INEC declaration of Yahaya Bello as the winner of the election.

“We, therefore, stand with the people of Kogi to state without equivocation that this brigandage and stealing of our mandate cannot stand.

“We will never despair but remain strong in our determination to retrieve the mandate freely given to us by the people in their desire for a change. We will pursue this course to its logical conclusion within the confines of the law of this country,” he added.

Wada commended the people of Kogi state for their resilience in the face of all intimidation, stressing that they showed, once again, that nobody can suppress their will at any time.

Taking a swipe at the leadership of the police and the INEC, the PDP candidate said, “Our campaign mourns our compatriots that were killed by the APC; their blood demands justice and we will ensure that they did not die in vain.

“Above all, the INEC Chairman, Prof. Mahmood Yakubu and the Inspector General of Police, Mohammed Adamu, will surely account to God and the people for the roles they played in this election; if not in this world, then certainly in the hereafter.

“We, therefore, call on all Nigerians to stand with the people of Kogi state at this trying time as they quest for the restoration of their mandate in this election.”