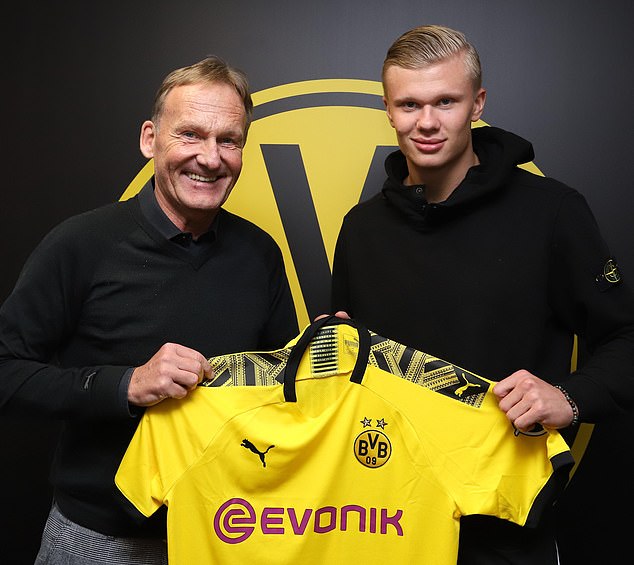 The 19-year-old Norway international has joined the German side on a deal until 2024.

Leeds-born Haaland, the son of former Leeds and Manchester City player Alf-Inge Haaland, moved to Salzburg from Norwegian side Molde in January.

He had been a reported transfer target for Manchester United and Juventus.

Haaland has scored 16 goals in 14 appearances in Austria's top division this season and a further eight in the Champions League group stage, the second most in the competition.

Salzburg finished third in Group E, which was won by Liverpool.

Haaland, who will join Dortmund on 3 January, said: "There was a feeling right from the start that I absolutely wanted to switch to this club, go this route and play football in this incredible Dortmund atmosphere in front of more than 80,000 spectators.

"I'm already burning for it."

Dortmund chief executive Hans-Joachim Watzke said: "Despite many offers from absolute top clubs from all over Europe, Erling Haaland decided on the sporting task at BVB and the perspective that we have shown him.

"Our tenacity has paid off."

Borussia Dortmund are likely to listen to offers for England winger Jadon Sancho in the summer after completing this signing.

Sancho's contract is due to expire in 2022 and Dortmund are aware of his desire to play in the Premier League at some stage in his career and know they could command an enormous transfer fee for the 19-year-old, who cost them £8m when he joined from Manchester City in 2017.

All of England's leading clubs have an interest in Sancho but Real Madrid and Barcelona will also monitor developments. Under the terms of his exit from City, the club have the right to match any successful bid for the player.

Haaland's decision to join Dortmund is a blow to United.

Ole Gunnar Solskjaer managed the teenager at Molde and flew to Austria last month to speak with him. However, Solskjaer has felt for a number of weeks Haaland was far more likely to join a German club.

It has been suggested both Alf-Inge Haaland and agent Mino Raiola will get a share of future transfers as part of the deal and this was something United refused to negotiate about. Dortmund have not commented on the suggestion.