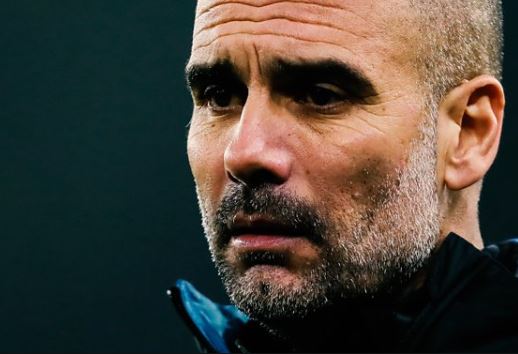 Manchester City boss Pep Guardiola conceded the Premier League title race is over after the reigning champions lost 3-2 at Wolves on Friday.

City are third in the Premier League, 14 points behind leaders Liverpool and a point below Leicester City.

Asked if the title race is over, Guardiola told BBC Radio 5 Live: "The advantage is too big, yes."

City have lost five Premier League games this season, one more than in the whole of the 2018-19 campaign.

They have also played a game more than Liverpool, who have dropped only two points this season, are on a run - stretching back to March - of 26 wins from 27 league games and are two matches away from going a full year unbeaten in the top flight.

"It's unrealistic to think about Liverpool, we think about Leicester," Guardiola added. "We have the chance to recover second place. I know the quality of my team but that's the situation."

Winger Bernardo Silva added: "It is a really bad situation for us. A frustrating first half of the season. Nobody expected us to be this far away from Liverpool at this halfway point.

"We have to continue now. We know that winning the title is very complicated. I wouldn't say impossible but very difficult."

Could City prioritise the cups?

Manchester City have already won one trophy this season, beating Liverpool on penalties to lift the Community Shield in August.

They are still competing in both domestic cup competitions and are in the last 16 of the Champions League, where they will meet Real Madrid.

They face League Two side Port Vale in the third round of the FA Cup on 4 January, before taking on rivals Manchester United in the first leg of their Carabao Cup semi-final on 7 January.

But Guardiola insists City will not prioritise these competitions, as they have to secure a European spot for next season.

"We cannot prioritise or next season we'll not be in Europe," said Guardiola. "We come back in less than 40 hours to play another game [against Sheffield United]. We'll see how [the players] feel. That's what we are going to do."

I told them to keep believing - Nuno

Wolves manager Nuno Espirito Santo praised his players for maintaining the belief they could eventually end City's resistance, despite finding themselves 2-0 down against 10 men through Raheem Sterling's double following Ederson's red card.

The home side dominated possession as they looked for a way back into the match, with Adama Traore's precise finish giving them hope before he dispossessed City left-back Benjamin Mendy and set up Raul Jimenez to clip in the equaliser from close range.

From that point Wolves had all the momentum and energy, sealing victory when Matt Doherty drilled in after a neat one-two with Jimenez to spark wild celebrations at Molineux.

"It was an amazing atmosphere, a very emotional game," said Portuguese boss Nuno.

"When City have one man less, it changes the reality of the game. We conceded but we reacted good and didn't change our way.

"We achieved a very good performance. The boys worked very hard and kept on believing.

"I told them to keep doing the same things and finding solutions. More important is that we stayed in the game. We didn't do that, we conceded the second goal and made it hard for ourselves but it was a fantastic reaction."