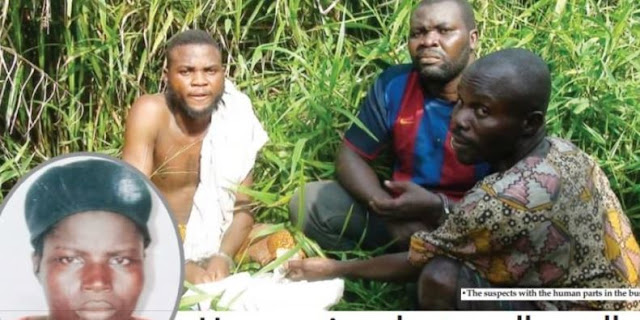 Thirteen suspected ritual killers made up of herbalists, Islamic clerics popularly called alfas and a pastor, have been arrested by operatives of the Inspector-General of Police Intelligence Response Team (IRT) in Ogun State for allegedly killing a 30-year-old housewife identified as Mrs. Abosede Adeyemi Iyanda.

Eight other suspects, including those who were said to be trading in human parts, are still at large.

Operatives in the Ogun State annexe of the IGP Intelligence Response Team (IRT) were said to have swooped into action following a petition by one Segun Adeyemi alleging that his daughter, 30-year-old Abosede, suddenly disappeared on her way back from office on November 3, 2019.

The petition was addressed to the Inspector General of Police through the Commander of the IGP Intelligence Response Team, Abba Kyari, a Deputy Commissioner of Police.

Explaining how the suspects were arrested, a police source said that on the strength of the data available to the IRT Ogun State team, Segun Olaniyi was tracked and arrested.

His confession led the IRT detectives to Abeokuta and different Ogun villages like Ifo, Itori, Papalanto and Adigbe, where eleven suspects were arrested and eight of them confessed to the kidnapping, killing and selling of the body parts of the victim.

They were also said to have relayed how the victim was slaughtered, saying that Olaniyi called Babalola (Akanbi) and Ayo (Adeleye) on the phone to come and do the slaughtering of the woman who was formerly his girlfriend but now married to another man, when she visited him in his ritual office by the side of a river.

While in his office, Segun (Olaniyi) told Ayo to go and buy food for the woman, who they said felt very tired after walking a long distance to get there. Segun then put in the food a drug that would make her feel weak and sleepy.

Segun later told her to go to the stream beside his office and wash her hair while she was completely naked. He asked Ayo (Adeleye) and (Babalola) Akanbi to lead her there.

While Abosede was washing her hair, Ayo pushed her head into the river, brought out a pocket knife and killed her. Both of them then pulled her body out from the river and dismembered it, separating the flesh from the bones as directed by Segun, assisted by Akanbi.

They later cut the flesh into pieces and sold them to some herbalists, alfas and a pastor who needed them for money rituals. Some of them also allegedly roast the meat and ate it with hot drinks.

The source further disclosed that the man and the surveyor who sold the land close to the stream to Segun to build his ritual office was being interrogated by the IRT operatives.

In his confession, Segun, a native of Asi village, Odo Otin LGA, Osun State, said he dropped out of school in Primary 5 and was married to two wives with four children.

“I talk to the oracle to give me the solutions to my customers’ health challenges. I worship Ifa. It was during our meeting that I met one native doctor who told me that the fastest way to become rich is to go into rituals.”

On how he planned the killing of her former girlfriend, he said: “She called me on the phone that she was coming to see me. I asked her the reason for her visit and she said she wanted financial assistance to boost her business.

“I called Akanbi who is my helping hand and told him to come around because someone would be visiting us. Already, we had work at hand, so Akanbi suggested that we use her for the work.

“It was Ajibola that introduced Mustapha Iliya to me. “I used part of the flesh to do powdered medicine which if taken with a hot drink would draw customers.

“At times, we kill the husbands of some of our customers to turn them into widows so that they would join us in bringing victims to be slaughtered.”

In his own confession, Akanbi said: “I am from Iwugo village in Ogun State. I am married with two kids. I was a welder before I became a babalawo (herbalist). I used to assist Segun. If he wanted to buy kola or kill a goat, I would be the one to do it.

“Segun gave me N200 to buy food for the victim and he put sleeping medicine in the food. Ayo and I killed her in the stream.”

Another of the suspects, Adewole, said: “I am a pastor. I perform a miracle with human flesh. I bought part of the flesh worth of N5,000. We also give it raw to some customers to chew and wash down with a hot drink.”