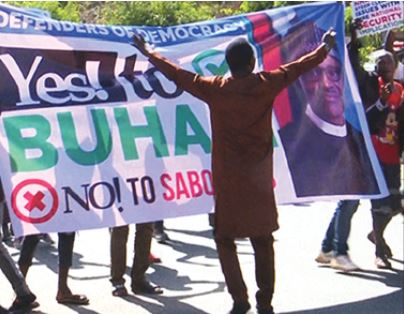 Justice Ahmed Mohammed of the Federal High Court in Abuja, on Monday, recused himself from a suit brought by Omoyele Sowore, the convener of #RevokutionNow, currently before him.

Mohammed made this known to parties at the mention of the motion ex-parte filed by Sowore to challenge his continued detention by the Department of State Service (DSS).

And at the National Human Rights Commission (NHRC) head office in Maitama, Abuja yesterday, suspected miscreants disrupted a protest by a coalition of civil society groups over the continued detention of Sowore. Many were injured.

At the FHC, Justice Muhammed told counsel representing the defendants and plaintiff in the case that he decided to withdraw from the matter because Sahara Reporters, an online newspaper published by Sowore had in 2016 and 2019 accused him of collecting bribe in a case between the Federal Government and Gabriel Suswam, a former Benue State Governor.

The Director-General of DSS and the Attorney General of the Federation (AGF) are the first and second defendants in the suit.

Mohammed, who sought the opinions of the lawyers, said in the interest of justice, it would be better for him to recuse himself.

The judge then stood down the case for a few minutes.

He said, “I have an issue with this matter. I want you, counsel, to look at it before we come back. I want to have your opinions.

“When the registrar of this court called me and informed me that I will be handling this matter, I asked if the chief judge was around and I was told he had travelled for Christmas.

“My conscience is telling me I should not take this matter subject to what people will say and what you will think.

“This applicant (Sowore) is the publisher of Sahara Reporter. Sometimes in 2016, he accused me of taking money for a matter to compromise the course of justice and I returned the case file but it was returned back to me that it would not be reassigned.

“Again this year, around June, the same applicant accused me of making money again on the same case and I had to hands-off again.

“Then the case was reassigned to Justice Abang.

“In all honesty, will it be fair for me to sit on this matter concerning the publisher?”

Mohammed, who said parties’ confidence was paramount in a matter, added: “justice is a fair trial.”

“What if in a way my order seems not to be favourable, I will be seen as being paid for or when the proceeding is even going on, the applicant himself will be apprehensive. He will ask ‘what judgment will this judge gives.’”

Sowore’s lawyer Femi Falana (SAN)who said he was ready for the matter, had informed the court that they filed an application of enforcement of the applicant’s fundamental human rights dated November 15, 2019.

Godwin Agbadua, counsel to the DSS, told the court that he got to know about the proceeding through the media.

“I leant the first respondent, the DSS DG was summoned to be in court today(Monday).

“But we are unaware that the applicant has filed several processes against the first respondent.”

Justice Mohammed, however, decided to allow all the parties to look at the processes in the court file and then read out the letters sent to the DSS and office of the AGF by the Deputy Registrar, Litigation, informing them of the proceeding. He said the proceeding was delivered by a bailiff on December 19 to both offices.

The Judge, who was unhappy with Agbadua’s comment, later stood down the case for the parties to regularise all the processes and to seek for their opinions on his decision to withdraw from the case.

When the court reconvened, Falana said though he had no course to doubt the judge, it was better in the interest of justice for him (Mohammed) to recuse himself from the matter.

He said: “I am flabbergasted by this. Although I am not aware of this publication, My Lord, as you raised this matter, my mind went to a case of the late Chief M.K.O. Abiola Vs FGN in 1995 where the Supreme Court disqualified eight justices from hearing any of the appeal arising from Abiola’s case on grounds that the Concord Newspaper of which Abiola was the publisher had written a story concerning the eight justices which had led to the institution of a libel suit against the newspaper.

Sowore, through Falana had filed a motion ex-parte before Justice Ekwo to demand his unconditional release in pursuance of the release order made by Justice Ijeoma Ojukwu on November 6.

He argued that his continued detention in spite of the November 6 release order was “unlawful, unconstitutional, null and void.”

The DSS operatives had rearrested Sowore shortly after a court proceeding on December 6. The incident took place barely 24 hours of releasing him and his co-defendant, Olawale Bakare, from custody.

The AGF, Abubakar Malami (SAN), on December 13, 2019, announced his takeover of the prosecution of Sowore in the charge of treasonable felony leveled against him.

At Maitama, Abuja, activists who gathered at the NHRC headquarters to present a letter to the secretary of the commission had a raw taste from suspected miscreants.

The activists, who displayed placards with inscriptions such as ‘Stop silencing dissenting voices,’ ‘save our democracy,’ and ‘NHRC must protect our rights,’ were singing and dancing when the miscreants emerged from a nearby street.

The miscreants arrived with a large banner with the inscription, ‘Support Buhari, say no to saboteurs ’ as they chanted ‘Sai Baba.’

A few minutes later, they attacked the activists and journalists who scampered for safety.

One of the coalition leaders, Deji Adeyanju and two members were assaulted with sticks and stones.

Adeyanju sustained some injuries before he was rescued and taken to an unidentified hospital for treatment.

A police team that attempted to stop the melee was also overwhelmed by the miscreants.

The convener, Free Nigeria Movement, Ralph Adebayo, described the attack as unfortunate and a sign of things to come in 2020.

Adebayo said: “What happened today(Monday) is a tip of the iceberg. It is a sign of things to come in 2020. Everybody should brace for the battle to save and defend democracy in Nigeria.”

But Ibrahim Dala, who led the suspected miscreants said the assault was in reaction to verbal insults from the activists.

Dala, who described himself as the co-convener of the Centre for Leadership and Development Initiatives, said: “We will not allow foreign mercenaries and opposition to come and sabotage the government of President Buhari.”