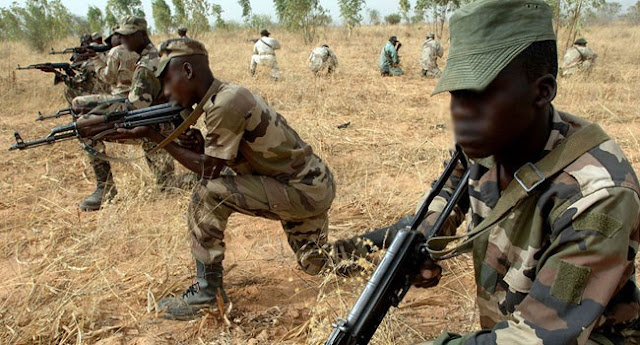 About 15 suspected members of Boko Haram were killed in a gun battle with soldiers in Michika, Adamawa State, on Thursday evening.

A few soldiers were injured.

The insurgents had entered the town at 6.20pm on motorcycles through Koppa village and Wurogayadi, shooting sporadically.

Residents fled in different directions, some into the bush, some to neighbouring towns and some up nearby hills.

But the soldiers, assisted by local vigilance group members, rose in defence of the town and succeeded in repelling the insurgents.

A resident said: “They divided themselves into two cells: one group followed through Michika General Hospital, while the other group took the town’s major road firing shots sporadically.

“They only looted few shops before soldiers engaged them in a fierce battle. Scores of Boko Haram were killed; I saw over 15 dead bodies of the insurgents littered on the streets.

“While fleeing, their vehicle had a flattened tyre and this forced them to abandon it, and some of their motorcycles.”

There was no immediate official comment from the military on the attack.

The police spokesperson in the state, Suleiman Nguroje, said the situation had been brought under control, though he could not give casualty figure at the time of filing this report.

He said the situation had stabilized.

”Some residents who fled the town have started returning because the attackers were repelled by the soldiers,” the council chairman said.

In a telephone interview, a community leader and former chairman of Michika local government, Stephen Maduwa, said military aircraft were promptly drafted to the area and aircraft gunshots were heard by residents as the attackers were forced to retreat through Lassa, a community near the Sambisa Forest.

He said security personnel, including the local vigilantes, were quickly mobilised to repel the attack and secure the communities.

“During the night attack, the insurgents had entered our town of Michika opened fire sporadically. They shot in front of my house before they were forced to retreat by soldiers and local vigilantes.

“We slept with our two eyes opened, for fear of uncertainty. We want President Buhari to be proactive in tackling this menace of insecurity plaguing our societies.”

Senator Ishaku Abbo, who represents the area in the National Assembly, hailed the military for their gallantry.

They were regularly attacked close to the 2019 general elections, causing uncertainty for the electorate throughout the election period and forcing the Independent National Electoral Commission (INEC) to conduct the election in only three centres in the whole of Madagali LGA which was more often attacked by Boko Haram days before the election.

The Thursday attack came three days after a visit by the Chief of Army Staff, Tukur Buratai, to troops in Madagali.