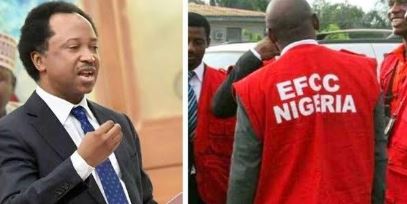 Operatives of the Economic and Financial Crimes Commission (EFCC) on Wednesday conducted searches on two houses and an office of the embattled Sen. Shehu Sani.

The searches were said to be in line with the ongoing investigation of the Senator for alleged extortion of $24,000 from the Chairman/CEO of ASD Motors, Alh. Sani Dauda.

Also, the EFCC took evidence from the wife of the businessman, who confirmed that Sani came to their home to meet with her husband.

She admitted that after one of the visits her husband wept.

According to a top source, the EFCC obtained a search warrant from a Chief Magistrate’s Court to conduct searches on the Senator’s houses and office in Abuja.

The source said: “In line with the ongoing investigation of the allegation of extortion against the Senator, it became expedient for our detectives to search his houses and office.

“We followed due process by obtaining a Search Warrant from a Chief Magistrate’s Court. And we ensured that the suspect followed our detectives accordingly.

“So far, nothing was found against him during the operation. The senator has since been returned to our custody.

But when he was taken out for the operation, Sani said:” We are used to all these, let us go to my houses and office. I have not incriminated at home.”

The Senator has consistently maintained that he “did not extort $24,000 from the businessman.”

But the EFCC has grilled the wife of the CEO of ASD Motors in connection with the extortion.

Another source said: “The wife of the complainant was quizzed. She admitted that Sani visited their residence to meet with her husband. She said after one of the sessions, her husband wept.

“We are yet to close this ongoing investigation. We will look at other clues at our disposal.”