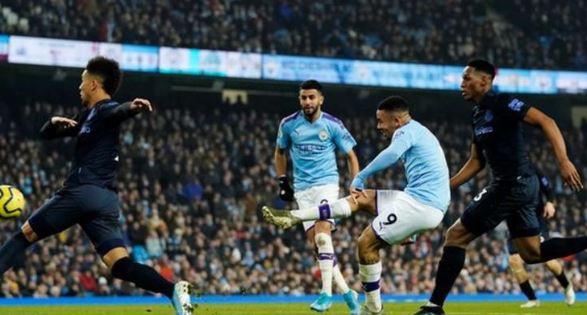 Gabriel Jesus continued his rich scoring form against Everton by grabbing both goals in Manchester City's victory at Etihad Stadium.

Jesus curled in a brilliant opener six minutes after the break, before producing a low driven finish seven minutes later. The Brazilian has now scored seven goals in his past five Premier League appearances against Everton.

City looked comfortable until Richarlison fired in at the far post in the 71st minute, following an error by City keeper Claudio Bravo.

The champions had a first-half Phil Foden effort ruled out for offside in the build-up, following a VAR check.

Pep Guardiola's third-placed side are a point behind Leicester, having played the same number of games, and 10 behind leaders Liverpool, who have two games in hand.