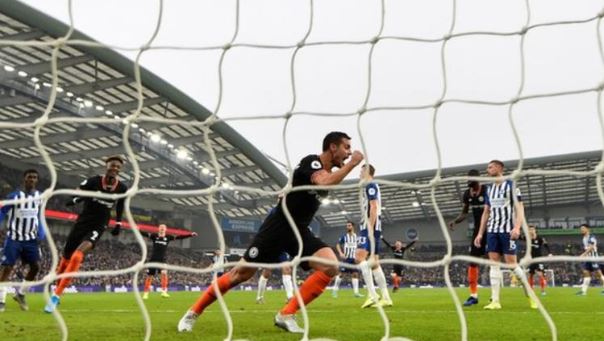 Alireza Jahanbakhsh scored with a spectacular overhead kick to stun Chelsea and earn Brighton an unlikely point at the Amex Stadium.

The Seagulls were poor for most of the match and looked set for defeat before the Iranian substitute, who scored his first goal for the club on Saturday, brought the home support to their feet in the 84th minute with an early contender for goal of the month.

Cesar Azpilicueta gave Chelsea the lead with his third of the season when he fired in from close range after Tammy Abraham's shot was blocked by Aaron Mooy.

Brighton's attacking threat was largely nullified by Chelsea's defence, although aside from the goals they produced the clearest chances - both thwarted by the brilliance of keeper Kepa Arrizabalaga.

The Spaniard produced a one-handed stop to deny Aaron Connolly and then saved Neal Maupay's low drive with his feet.

The point extends fourth-placed Chelsea's advantage over Manchester United in fifth to five points. Brighton moves up a place to 13th, above Burnley on goal difference.

This result is another setback for Frank Lampard and his side, who looked assured of an eighth league win on the road this season.

Prior to Jahanbakhsh's goal, his defence had suffocated Brighton's attack.

Having been accused of being sloppy at times this season, Kurt Zouma, Antonio Rudiger, Reece James and skipper Azpilicueta were at their dogged best - rarely allowing an opposition ball to find its way into the six-yard area.

Youth graduate James shone the brightest, and manager Lampard has a potential diamond. Aside from providing support for his centre-backs, the 20-year-old was exceptional as an attacking force down the right.

Brighton's Dan Burn will not want to face him too soon having left the pitch holding his arm in the 22nd minute following a collision with the England Under-21 player.

The Blues, however, were as poor as Brighton in the attack, and keeper Mat Ryan had less to do than his opposite number. The only time he was called into action in the second half was to make a routine low save from Christian Pulisic.

Tears of joy to look disbelief - what a week it has been for Jahanbakhsh.

A lack of first-team opportunities had frustrated the Iranian since he made a £17m move from AZ Alkmaar in July 2018, so the outpouring of emotion when he opened his Brighton account against Bournemouth last weekend came as no surprise.

Manager Graham Potter did not reward the 26-year-old winger with another start, but having watched his other attackers fail to make much of a dent in the Chelsea defence he threw on Jahanbakhsh in the 68th minute.

Connolly came close to beating Arrizabalaga with a low drive before Jahanbakhsh tried the more unconventional method and, with his back to goal, he found the Chelsea bottom right with a superb acrobatic effort.