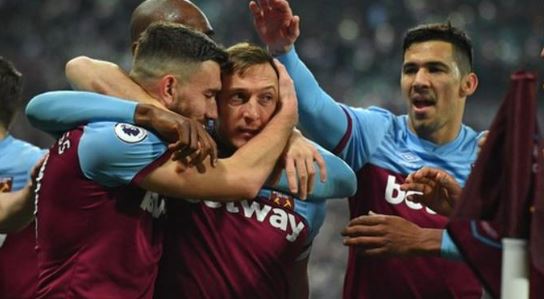 David Moyes' West Ham return got off to the best possible start as two Mark Noble goals helped his side to an emphatic victory over Bournemouth.

Captain Noble opened the scoring inside 20 minutes with the help of a deflection before Sebastien Haller's bicycle kick doubled the Hammers' lead.

Noble scored his second 10 minutes later from the penalty spot after being brought down by Harry Wilson, before Felipe Anderson completed the rout.

West Ham were lucky not to end the match with 10 men after Aaron Cresswell was sent off for a reckless challenge on Ryan Fraser, only for the video assistant referee (VAR) to downgrade the dismissal to a yellow card.

The victory was West Ham's second in six matches and lifts them out of the relegation zone, with Bournemouth slipping down into 18th.

Moyes replaced the sacked Manuel Pellegrini on Sunday, returning to the club he led to Premier League safety at the end of the 2017-18 season.