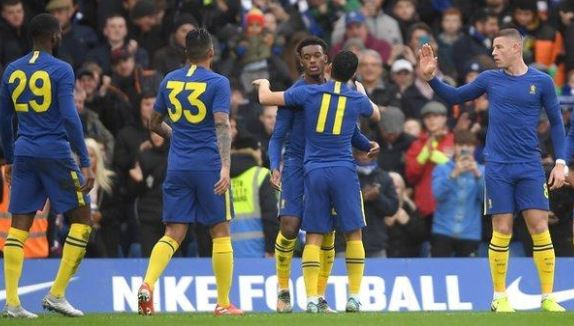 Callum Hudson-Odoi scored one goal and made another as Chelsea beat Nottingham Forest in their FA Cup third-round tie.

The hosts only needed six minutes to score as Hudson-Odoi cut in from the right and shot into the bottom corner.

Forest, fourth in the Championship, were then awarded a penalty but, after a lengthy video assistant referee delay, the decision was reversed.

Chelsea soon had a second goal when Hudson-Odoi's shot was parried with Ross Barkley scoring from close range.

The Blues, who have won the FA Cup on eight occasions, will find out their fourth-round opponents on Monday. The draw will be on BBC One and the BBC Sport website from 19:30 GMT, before the Arsenal versus Leeds United tie.

Before the match, Forest boss Sabri Lamouchi predicted his side had "no chance" of winning away at a team fourth in the top flight.

Forest only had two efforts at goal in the entire 90 minutes, including only one on target, and watched Chelsea dominate 76% of possession.

Lamouchi had clearly prioritised trying to win promotion instead of aiming for a cup shock as he made 10 changes from the side that won 3-2 against Blackburn, including the first start for 17-year-old forward Alex Mighten and with five of his seven substitutes aged 21 or younger.

Chelsea made nine changes themselves, although their side still included plenty of Premier League experience, and they only needed six minutes before Hudson-Odoi scored following a fine passing move involving Barkley, Pedro and Michy Batshuayi.

However, Forest thought they should have had a chance to equalise when referee Peter Bankes gave a penalty after Mighten had been brought down by Fikayo Tomori.

But, following a VAR delay of two minutes and six seconds, Mighten was judged offside by the narrowest margin possible before the foul had occurred.

Chelsea took charge from then on as Batshuayi headed over from Reece James' left-wing cross before Barkley scored Chelsea's second after Jordan Smith had parried Hudson-Odoi's effort.

Barkley nearly scored his second with a header in the second half following more good work from Hudson-Odoi, but Smith made a fingertip save to push the ball onto the post.

These two teams had met in the third round of the FA Cup exactly a year ago and Chelsea won it 2-0 on that occasion.

Forest thought they had pulled one back when Ryan Yates glanced a header into the net but it was ruled offside by an assistant before the decision was confirmed by VAR.

Chelsea boss Frank Lampard, who won the FA Cup four times as a player with the Blues, was able to bring on 19-year-old English midfielder Tariq Lamptey near the end, handing the teenager a home debut in the 76th minute.

England international Hudson-Odoi nearly had the final say, but shot just wide in injury time on a routine afternoon for his side.