FA Cup: Leicester qualify for fourth round after victory against Wigan Athletic 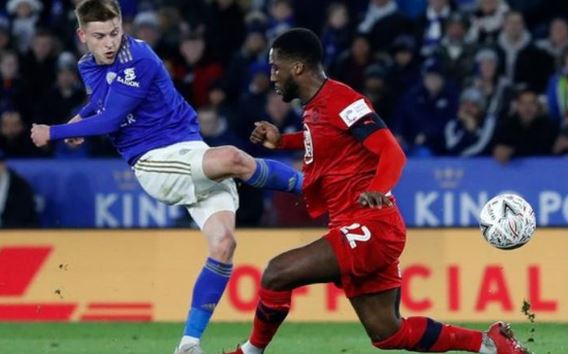 Leicester qualified comfortably for the FA Cup fourth round as they proved too good for Championship Wigan Athletic.

The Latics, who won the cup in 2013, fell behind when Tom Pearce scored an own goal on his Wigan debut, steering the ball past team-mate David Marshall.

Harvey Barnes had an effort well saved before he added a second, although his strike went in off Cheyenne Dunkley.

Leicester, second in the Premier League, could have scored a third but an unmarked Dennis Praet headed wide.

Wigan substitute Jamal Lowe thought he had pulled one back when he volleyed in but it was ruled out after a check from the video assistant referee showed there had been an offside earlier in the move.

Rodgers takes another chance to rotate the squad

The Foxes are in the middle of a gruelling schedule that will see them play nine times between 14 December and 11 January and boss Brendan Rodgers will be pleased at the routine nature of a victory against a side in the bottom three of the Championship.

Rodgers had successfully rotated his squad in their past two Premier League wins and only left-back Ben Chilwell remained in the starting line-up from the side that won 3-0 at Newcastle on 1 January.

Striker Jamie Vardy, back in training after a calf injury, was not risked, while midfielders James Maddison and Ayoze Perez were unused substitutes. Caglar Soyuncu had also been on the bench, although the Turkish defender had to come on after 25 minutes when club captain Wes Morgan, 35, went off injured.

A 19th-minute own goal from Pearce, who fell over his own feet as he tried to clear Marc Albrighton's low cross, gave the Foxes a lead they never looked like losing.

Barnes nearly made it 2-0 a few minutes later only to be denied by an excellent save from visiting goalkeeper Marshall.

But a quick counter-attack just before the break, which ended with Barnes' shot clipping Dunkley and looping over Marshall, saw Leicester double their advantage and move them into the fourth round for the sixth time in nine seasons.

Leicester are next in action on Wednesday when they entertain Aston Villa in the first leg of their Carabao Cup semi-final.