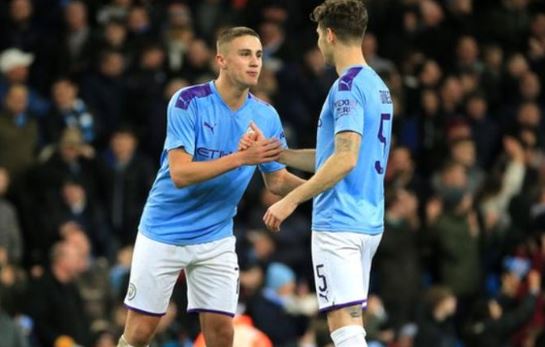 Phil Foden made one goal and scored another as holders Manchester City saw off a spirited Port Vale side to book their place in the fourth round of the FA Cup.

City, who won all four available domestic trophies last season, had to work hard to break down their League Two opponents, but eventually ran out comfortable winners.

Oleksandr Zinchenko put Pep Guardiola's side ahead with a rasping shot from distance that Vale captain Leon Legge could only help into his own net.

But City failed to turn their superior possession into further goals and were surprisingly pegged back by a superb Tom Pope header from a pinpoint David Amoo cross.

That sparked wild celebrations from more than 8,000 Vale fans who packed the top tiers of the south stand at Etihad Stadium, but their side were level for only seven minutes.

City kept pouring forward and Foden set up Sergio Aguero to fire home at the near post, with Legge again getting the final touch.

That goal was checked by the video assistant referee before being awarded; when City scored their third goal just before the hour mark, it was initially ruled out and needed VAR intervention before being given.

Taylor Harwood-Bellis was flagged offside when it appeared John Stones had put the ball into the net but replays showed the 17-year-old had got the final touch and was actually onside too.

On a good day for City's academy, two more graduates combined for City's fourth goal, with Foden running into the box to bury Angelino's shot past Scott Brown.

Pope makes his point with a goal

The derogatory comments Pope made about Stones on social media last summer when he called him 'a target man's dream', added extra spice to this tie, especially when both men were named in their respective starting line-ups.

But Pope, 34, had given some more insight into his thinking this week when he talked about how he likes to prey on the weakest link in any defence, so it was no surprise to see him lurk near Harwood-Bellis instead.

That was how he found space to convert Amoo's cross at the near post, darting away from his teenage marker at the last second.

Stones, back in the City side after a month out with his latest injury, got the better of the veteran forward whenever their paths crossed directly.

But it was still fitting that he and Harwood-Bellis combined to score City's third goal, and ensure any personal battle with Pope finished all-square.