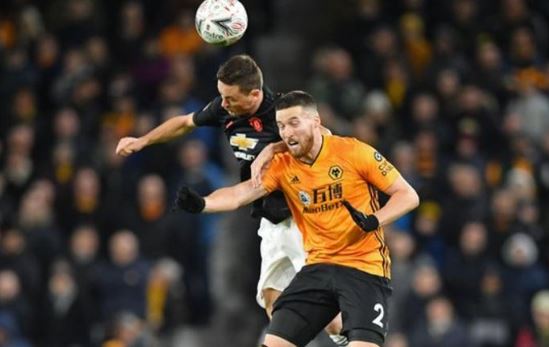 Marcus Rashford and Raul Jimenez both hit the crossbar as Wolves and Manchester United played out a goalless FA Cup draw at Molineux.

With United having a two-legged EFL Cup semi-final against Manchester City this month, the Old Trafford replay will take up their only spare January midweek without a game.

For Wolves, it adds to a marathon season that has already reached 36 games.

In a largely disappointing rematch of last year's quarter-final, United failed to have a shot on target in a domestic game for the first time since January 2015.

Rashford came close a minute after his introduction as a second-half substitute when his shot looped off Wolves skipper Conor Coady.

Jimenez's was all his own work as he raced down the byeline and then, completely lacking in support, surprised United keeper Sergio Romero by shooting from a virtually impossible angle, sending the ball skidding off the woodwork.

Wolves, whose season started in July, gave a debut to 21-year-old striker Benny Ashley-Seal. He became the 26th player to start for Wolves during this campaign.

In truth, the young Londoner did not sparkle and appeared to complain of feeling ill before he was replaced by Jimenez at the break.

Wolves did create the best chance of the opening period, when a Pedro Neto corner was flicked on to Matt Doherty at the far post, only for Romero to make a fine reaction save.

Romero repelled Neto with his feet when the Portuguese teenager collected Adama Traore's pass and created a space for a shot on the edge of the area after half-time, by which point the visitors were still to have a shot on target.

They did have a penalty claim for a foul on Brandon Williams by Leander Dendocker, although the video assistant referee confirmed on-field official Paul Tierney's decision not to award it

Juan Mata drifted a free-kick just wide and Rashford hit the bar when the ball looped up after Coady slid in to block 19 minutes from time, but Wolves keeper John Ruddy had still not made a save of note even then.

No-one could accuse the visitors of having an easy time of it in the FA Cup recently.

Their past four games have all been away. Their opponents? Arsenal, Chelsea, Wolves and Wolves again. Molineux proved to be the end of their journey last season and for watching former manager Sir Alex Ferguson it must have felt a long time ago that United came to this venue and won 3-0 in a fourth-round tie in 2006.

Ferguson's team that day included Wayne Rooney and Ruud van Nistelrooy, two of the greatest forwards in the club's history.

Current boss Ole Gunnar Solskjaer simply does not have the same class in his squad and on a day when Rashford started on the bench and Anthony Martial was missing through illness, United laboured badly in the attack.

Typical of a first half in which the visitors failed to have a single shot on target was the moment when Harry Maguire won the ball with a thunderous tackle on Traore, only for Andreas Pereira to pick up possession on the halfway line then, rather than drive into space, plod forward a few strides, turn square with a slow pass and lose any momentum.