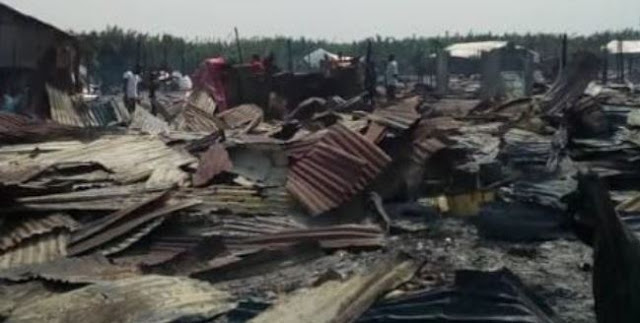 No fewer than 2,000 houses have been burnt and over 5,000 people rendered homeless following a fire incident that occurred in the early hours on Friday at Iwoukpom community in Ibeno council area of Akwa Ibom State.

Most of the buildings were constructed with wood thereby increasing the fatality rate of the incident even as fishing equipment and fishes were burnt.

It was also not immediately known if lives were lost. Loud wailings from victims were heard as the recounted their loses.

Mrs Idongesit Udoh, a mother of three children who was crying said she could not pick a pin from her house before the inferno rendered her homeless.

“The entire building was razed completely and I could not pick a pin in the house,” she lamented.

She called on the state government, kind-hearted individuals, and others to come to their rescue, lamenting that she does not have room on her head anymore.

He said the fire incident destroyed completely everything in the environment including fishing equipment in the area.

“It is pathetic and the people have lost everything in their life, so there is no word that is qualified to explain the circumstances,” he cried out.

He said that over thousands of people had been rendered homeless and called on the state government to provide internally displaced camp for the affected victims.

The leader of the Yoruba community, Mr. Foli Ogungbemi, Special Adviser to the Chairman of Ibeno on non-indigenes said the entire place was settled mostly by Yoruba people.

He said that when the incident happened the people were running for their safety and none could really know the root cause of the inferno.