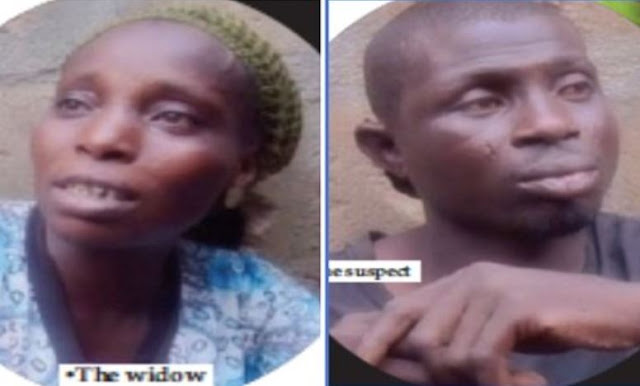 When a Lagos-based auto mechanic, Monsuru Adesiyan a.k.a. Oba Idan told Olanike Ali, a widow, that he could help her avert another calamity barely one month after her husband died, the 39-year-old widow had no inkling of the sacrilegious sexual desire he harboured.

The 35-year-old subsequently lured the widow into a sexual affair and then violated her two teenage daughters on the pretext that the only remedy to a looming spiritual attack on the family was for him to take the girls to bed and use a white cloth to cleanse their private parts for a propitiation at a deity’s groove.

The widow, in her ignorance, forced her reluctant daughters, aged 13 and 19, to sleep with Adesiyan, telling them that they only had to do it for a few days. But trouble began when Adesiyan continued to extend the duration of his affair with the innocent girls by several weeks, making love to the day and night.

The situation later degenerated into an altercation between him and their mother, prompting the leader of the Odua People’s Congress (OPC) in the area to intervene and arrest Adesiyan.

According to Fakorede Oluifa, a chieftain of OPC in Iju Station area of Lagos where Adesiyan lives with Olanike, the suspect had vanished for many days before he was arrested a fortnight ago as he sneaked into the house to move the distraught girls and their mother to an unknown location.

Oluifa said: “Four days ago, I met the couple (Olanike and Adesiyan) fighting. It was such a big fight and the woman’s daughters from another marriage were crying. She opened up to me that her new ‘husband’ had been sleeping with her two daughters on the pretext that he wanted to fortify them against evil and help cure her only son of his mysterious illness.

“We wanted to apprehend Monsuru (Adesiyan), but he ran away from home. However, yesterday, he sneaked into the house and wanted to take the girls away so they would not reveal to us how he had been violating them and subjecting them to sacrilegious sexual intercourse.

“We, however, intercepted him and he opened up on how he had been sleeping with the two girls and wiping their private parts with a white cloth for evil purposes.’’

Oluifa added that the suspect would be taken to the Red Brick Police Division in Iju.

In his own confession, Adesiyan said he had been sleeping with the two girls with the consent of their mother, who he deceived into believing that doing so was the only solution to her son’s illness as well as a way to avert a looming spiritual attack on her children.

He said: “My name is Monsuru Adesiyan. I am a mechanic by profession and a native of Akufo village in Ibadan, Oyo State. I have two children, a boy and a girl, with my former wife who died some years ago. I started dating this woman (Olanike) about six months ago and we live at Crossing area of Agbado (Lagos).

“Her only son, named Mathew, was sick and I consulted one of my brothers, Fabunmi, who is a herbalist, and he said the solution to the boy’s mysterious illness was for me to sleep with his older sisters, Morenikeji and Opeyemi, for seven days.

“My brother said that I would have to wipe the girls’ private parts with a white cloth which I must bring before a deity for propitiation.

The distraught girls said they initially protested against sleeping with their mother’s new lover, adding that they had to yield ground because their mother insisted that it was the only solution to their brother’s ill-health.

Opeyemi said: “I used to be a teacher in a private school in Ibadan, Oyo State. I was living with my late father’s younger brother.

“Suddenly, my mother visited me and told me that a member of my father’s family was using my glory and disturbing my siblings spiritually. She told me that I might run mad if certain atonement involving spiritual cleansing was not done for me.

“She said the spiritual cleansing would involve Monsuru (Adesiyan) sleeping with me. I was shocked that she could yield to such a distasteful arrangement. I was reluctant about it but my mother continued to persuade me until I gave in to Monsuru. My mother said he would sleep with me for four days only for Monsuru to change the timing to one week. He has slept with me for two weeks now. He made love to me and my sister every day until the situation became unbearable and I cried out and threatened to return to Ibadan.

“It was in the midst of the altercations that OPC operatives got to know that Monsuru had been having an affair with us, against our wish.’’

Also speaking, Morenikeji, who fought back tears as she recalled Adesiyan’s escapades, said: “Monsuru has already impregnated our mother.

I am 13 years old and was a virgin until he forcibly made love to me.

“He had accompanied my mother to where my younger brother, Mathew, was receiving treatment for a prolonged cough.

He told my mother that my brother’s illness was beyond the ordinary, noting that my late father’s relations were behind it.

“By then, my father was receiving treatment for swollen legs which later led to his death. He moved in with my mother at my father’s house in Fagba area of Iju Station, a Lagos suburb, and said the only solution to my brother’s sickness was for him to sleep with me and my elder sister. He used our mother to lure us into the plan and said he would have sex with me for just three days but later changed it to one month. He was making love to my morning, afternoon and night. We want Nigerians to save us from him o.’’

Explaining her complicity in the matter, the mother of the girls, who also admitted she’s currently carrying his lover’s pregnancy, said she was deceived by Monsuru into believing that certain people were after her and her children, through which he made love to her daughters.

She said: “Monsuru (Adesiyan) said his brother, a herbalist, told him to make love to my daughters as a solution to my son’s sickness, and to prevent those responsible for my husband’s death from attacking my children and I.

“I asked him to allow me to speak with his brother on the telephone but he refused. He tricked me into believing that my little son’s blood had been sucked dry by unseen evil forces and that making love to my daughters would heal my son, hence, I reluctantly agreed. He said he would wipe my daughters’ private part with a white cloth that he would subsequently take to a shrine for atonement. I reluctantly agreed because he said my son would die if I refused to approve of his intervention. He said that I would also vomit blood and die if I told anyone about him having sex with my daughters.

‘’We started dating shortly after my husband died in July (2019) and he discouraged me from taking my children to my husband’s funeral. He said that some persons behind my husband’s death would attack me at the funeral.’’