'I was rude with an idiot' before yellow card - Jose Mourinho 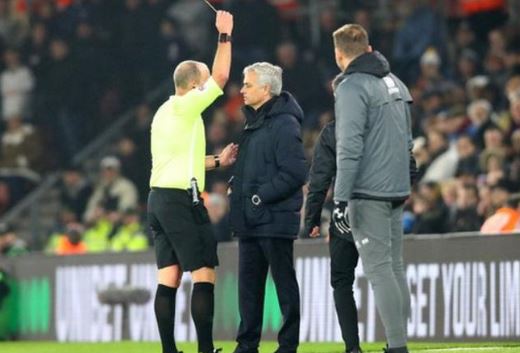 Tottenham boss Jose Mourinho said he was "rude with an idiot" after admitting he "clearly deserved" the yellow card he was shown in his side's 1-0 defeat at Southampton.

Mourinho appeared to argue with someone on the Southampton bench shortly after Harry Kane had a goal disallowed for offside in the second half.

Kane was forced off with a hamstring injury after the goal was ruled out.

Mourinho appeared to look at a piece of paper on the Southampton bench.

He was immediately shown a yellow card by referee Mike Dean, which Mourinho later said he "accepted" after arguing with goalkeeping coach Andrew Sparkes over what is understood to be an annoyance at time-wasting tactics.

"I was rude. But I was rude with an idiot. I clearly deserved the yellow card. I had bad words with the guy," Mourinho told BT Sport after his side fell six points behind fourth-placed Chelsea in the Premier League table.

"There was, of course, a reason for it. I will not tell you but for some reason, I had that reaction," he added while speaking to Match of the Day.

Southampton boss Ralph Hassenhuttl said: "I don't want to say anything. I have a very high opinion about this manager - he did so much for football."

Kane, who has started all but one of Tottenham's Premier League games this season, was substituted in the 75th minute, with Erik Lamela replacing him.

"Harry plays every minute, he plays all the time," said Mourinho. "It might be big, it might be small. For sure, he will be out."

Record signing Tanguy Ndombele was also forced off with an injury in the first half, replaced by Giovani lo Celso.

"Tanguy Ndombele, I don't know. I imagine this is the 10th injury of the season," Mourinho added. "They stop him to play. It doesn't give him continuity. We had three days between matches. Once more, he is out again."

Mourinho, who replaced Mauricio Pochettino as Tottenham manager last month, says the club are "not looking to be the kings of the market" after the transfer window opened on 1 January.

In his last role as manager at Manchester United, Mourinho spent nearly £400m on 11 players during a two-and-a-half-year spell at the club.

"We need time to work. We need what we are not having. We need to focus on what we have," he said.

"We see the bad result which is the continuity of the last year. For 12 months, it has been very difficult to get results away from home. The work is not about buying, it is about working with the players on the pitch.

"It is something that is very difficult for us because we have no time to do it."
Mourinho's memorable lines...
Luis Garcia scored the winning goal in Liverpool's Champions League semi-final win over Chelsea but it sparked debate

This is by no means the first time Mourinho has raised eyebrows with post-match comments.

Following his first game in charge of Real Madrid, which finished in a goalless draw with Real Mallorca, he said: "I'm not Harry Potter. He is magical, but in reality, there is no magic. Magic is fiction and football is real."

In response to criticism from then Juventus boss Claudio Ranieri in 2008, Mourinho said: "I studied Italian five hours a day for many months to ensure I could communicate with the players, media and fans [at Inter Milan]. Ranieri had been in England for five years and still struggled to say 'good morning' and 'good afternoon'."

And who can forget his response to Luis Garcia's infamous 'ghost goal' in Liverpool's Champions League semi-final win over Mourinho's Chelsea in 2005?

"The linesman scored the goal," said a furious Mourinho.