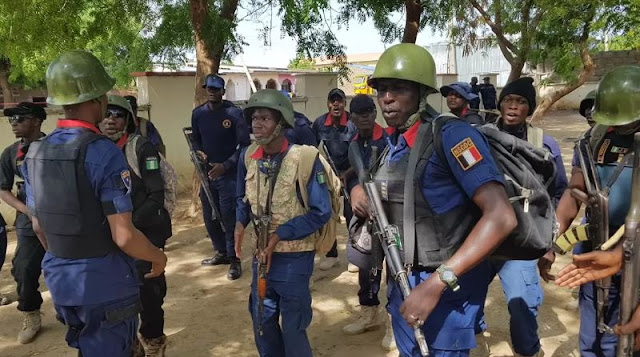 In a bid to forestall disasters arising from the further explosion of gas cylinders, the Nigeria Security and Civil Defence Corps, Kaduna State command in collaboration with the Department of Petroleum Resources (DPR), on Thursday, commenced evacuation of decommissioned LPG gas cylinders in the state.

So far, the exercise has witnessed the retrieval of 1,931 decommissioned cylinders and eight suspects have been arrested from three different locations in the metropolis.

According to a statement issued and signed by NSCDC Kaduna Command Public Relations Officer, ASC Orndiir Terzungwe, investigation of the suspects have commenced while all the exhibits are entrusted in the care of the keeper.

“It has been uncovered that decommissioned (expired) cylinders which are perforated and disposed of by Total were been refurbished by welders and sold back to unsuspecting persons.” He said

Recall that on January 4th, 2020 Sabon-Tasha residents in Chikun Local Government Area of the state witnessed a tragedy blamed on gas explosion which resulted in huge loss of properties and lives including a Professor of Physics from Ahmadu Bello University.

Consequently, as a proactive step in forestalling future occurrences, the Northwest Regional Coordinator of DPR, Isah Tafida led a powerful delegation from the department on a visit to the state Commandant, Babangida Abdullahi Dutsinma.

According to him, the purpose of the visit was to partner with the command in sanitizing the industry against sharp practices, safeguard the sanctity of human lives and protection of DPR personnel among others during enforcement.

“NSCDC and DPR which have a partnership to sanitize the industry are determined to continue with the enforcement to cover every nook and crannies of the state.

“Also, joined as a critical stakeholder in the exercise is the Kaduna Environmental Protection Agency whose mandate among others is to enhance safety in the environment. ” He said