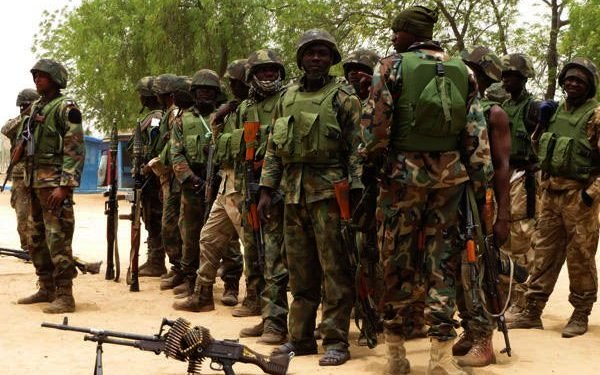 The Nigerian Military on Monday confirmed that an unnamed military officer, who recently returned from a foreign assignment, has tested positive, becoming the index case for the Armed Forces.

The Officer according to him has been admitted at the Gwagwalada Specialist Hospital, Abuja.

Confirming this on Monday, Coordinator of the Defence Media Operations, Major-General John Enenche, who briefed journalists at the Defence Headquarters Abuja, said the military will unveil 17 isolation treatment centres across the country for the treatment of the dreaded virus.

He said Armed Forces will enforce the restriction on movement as contained in the Presidential order.

According to Enenche, “A committee headed by the Chief of Defence Training and Operations, Major General Leo Irabor, is in place interfacing with all relevant Ministries, departments and agencies of the Federal Government of Nigeria managing the COVID- 19 pandemic.

“As mentioned in my first briefing regarding COVID-19, there are 17 isolation and treatment centres earmarked which are spread across the six geopolitical zones of the country.

“Further to this, a good number of Armed Forces of Nigerian medical personnel have been earmarked to be trained on the management of COVID 19 cases, which will be done in liaison with Nigeria Centre for Disease Control (NCDC)”.

He continued that, “in the same vein, about 48 Disaster Response Units of the Armed Forces of Nigeria are on Notice To Move in conjunction with NEMA. These units will handle operations other than medicals that may arise in the course of this non-kinetic military operation.

“Finally, the Armed Forces of Nigeria is to implement all restriction on movement in line with the Federal Government of Nigeria. For the avoidance of doubt, this includes the Presidential Directive given by the President Commander In Chief, during his address to the Nation on the COVID 19 Pandemic, on 29 March 2020.