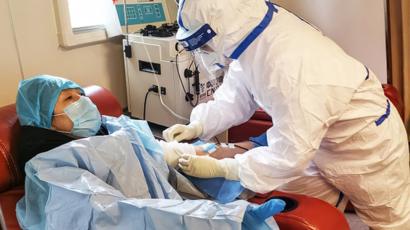 Ekiti State Government on Tuesday announced that the only index case of COVID-19 recorded in the state had been discharged from its isolation centre after he was certified free to go home.

The male patient, who had been receiving treatment at the Ekiti State Infectious Disease Control Centre, Ado-Ekiti, since March 18, 2020, when he tested positive to the coronavirus, was discharged from the centre at 2.00pm.

The state Commissioner for Health, Mojisola Yaya-Kolade who made this disclosure while addressing journalists in Ado-Ekiti, said that the patient was discharged after two tests run on him have come back negative.

She added that other tests carried out on the patient also revealed that his vital organs are functioning well and in good condition.

“The tests carried out show that his organs are also functioning well. So, we are happy to discharge him.

“We shall still keep monitoring him from his base and we also appeal to members of the public to call the emergency numbers to report any suspected case, so we can take action in a timely manner. It was a timely intervention that saved our index case.

She said further that the state was monitoring the 41 contacts that had been put in self-isolation, adding that they would remain there for the prescribed 14 days, saying the contracts were stable and without any symptom.

The Commissioner noted that several guidelines have been put in place to curtail the spread of the coronavirus in Ekiti State, stressing that the female caregiver of the late American, who had been in isolation, had also undergone tests for three times and that she was negative.

The State Governor, Dr Kayode Fayemi, who is also the chairman of the state Task Force on COVID-19, had earlier in a state broadcast on Sunday, given an indication that the patient might be discharged, should his second test come back negative.

The State Commissioner for Health, the Permanent Secretary of the Ministry, Dr (Mrs) Folake Olomojobi, and members of the State Task Force on COVID-19 had a brief chat with the patient and his sister shortly before his discharge.

The patient who wore a striped blue shirt on a pair of jeans trousers was in a relaxed mood and was seen chatting with his sister and a few health officials all through the period his discharge documents were being prepared.

Shortly after his discharge, the patient and his sister were driven in a blue ambulance back to his Ibadan, Oyo State base.

The 38- year-old patient who spoke with journalists in confidence expressed appreciation to the state government for his treatment, urging Nigerians to take the war against the dreaded coronavirus more seriously.

He said: “I appreciate the state government, the medical team and entire Ekiti people for their care and for standing by me during my trying moment.

“I want our people to know that Coronavirus is real. We should join hands with the government and observe all recommended hygienic procedures to curtail the spread of the disease”, he added.