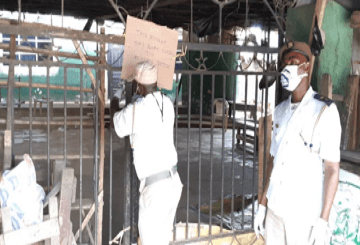 Director-General of Lagos State Safety Commission, Mr. Lanre Mojola, said the local government did not only seal-up the mosque but also fumigated the place of worship.

Mojola said following the attack on Tuesday night, the Task Force got in touch with some Muslim leaders in the area as well as the local government to report the ugly incident.

He said it was an ugly scenario, which would have been worse if the Task Force members had not tactically withdrawn to avoid an open confrontation in the community.

“It is a simple instruction from the government to curb the spread of coronavirus and avoid unnecessary death, but what we saw that day was flouting of the rule on social distancing by the worship and attempt to caution them and let them know the implication resulted in attack with the headlamp of one of our vehicles destroyed by the worshippers,” Mojola said.

Although he can not say for how long the sealing of the Mosque would last, he stated it may remain in place until the current situation improves.