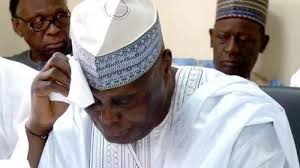 Prominent Nigerians have reacted to the demise of Abba Kyari, the Chief of Staff to President Muhammadu Buhari.

In separate tweets, they all paid glowing tributes to the deceased.

Abba Kyari was said to have died while receiving treatment for coronavirus at a private hospital in Lagos.

Former President Goodluck Jonathan, in his condolence message, prayed for Kyari’s friends and family “during this moment of grief.”

Nigeria’s Senate President, Ahmed Lawan in his message, asked God to “forgive the shortcomings” of the late Kyari.

The Group Managing Director of the Nigerian National Petroleum Corporation (NNPC), Mele Kyari, also disclosed that the deceased was a good man.

He said: “May Allah forgive Mallam Abba Kyari and have mercy upon him. Was a truly good man, profoundly faithful and loyal to our country.”

Former Kaduna Senator, Shehu Sani said: “Abba Kyari; The President has lost a trusted and loyal friend. A man who took the bullets of his master with smiles,calmness and silence. We knew his cap and his colours but never his mind or his own side of his story. He will be missed as a Punchman. RIP AK.”

Femi Fani-Kayode said: “I have lost a friend of 40 years. We were at Cambridge together. We worked in my father’s law firm together. We remained close throughout right up until the end even though we disagreed politically. Abba was a good man: a man of honour and a loyal friend. May his soul rest in peace.”

The Ooni of Ife, Oba Adeyeye Ogunwusi, described the death of the Chief of Staff to the President, Mr Abba Kyari, as shocking and an unfortunate surprise.

Ooni described the late Kyari as a coolheaded gentleman and great respecter of the traditional institution.