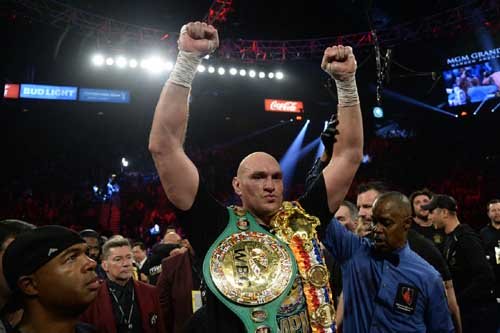 Tyson Fury is attempting to ‘have Deontay Wilder step aside’ from their trilogy fight so he can face fellow Briton Anthony Joshua in a heavyweight unification bout.

Metro report that the Gypsy King, the current WBC heavyweight champion, and his team have their eye on an all-British contest given the third instalment of Fury-Wilder, which was initially pencilled in for July, is off due to the coronavirus pandemic.

Team Fury is said to now be assessing their options about whether the fighter can be released from facing Wilder in a bid to provide the lucrative unification bout against WBA, WBO and IBF belt holder Joshua.

Both Fury and Joshua are contractually committed to their next fights – Fury against Wilder and Joshua against Kubrat Pulev at the Tottenham Hotspur Stadium – but the report details how Team Fury are assessing whether their fighter can get out of his arrangement to accelerate a unification.

Wilder would likely need to be offered a sizeable sum to pass up the opportunity to reclaim his WBC title in a third fight with Fury, having been dominated in their second fight?

Bob Arum, who co-promotes Fury, refused to quell suggestions that it could be Joshua, rather than Wilder, next for the two-time heavyweight world champion.

“All I’m saying is contracts are contracts, and Wilder has the option for the third fight and he’s exercised that option,” Arum said when speaking with the Telegraph.

“Therefore, while everything is possible, the one thing is not possible is to violate a contractual commitment.

“I would say right now there is no chance that Fury would fight anybody other than Wilder next. But, things change. Down the line, who knows? But right now the answer is no. The answer is Joshua has an obligation to fight Kubrat Pulev.”

In response to the Metro report, an official statement from MTK Global, Top Rank and Queensberry Promotions said: “Tyson Fury is the globally recognised number one heavyweight in the world and the current Lineal, WBC and Ring Magazine champion; Tyson is contracted to a third fight with former WBC world champion Deontay Wilder.”