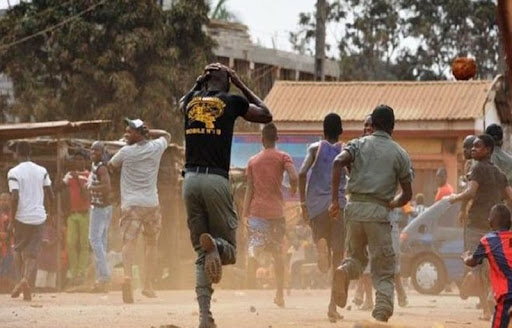 Gunmen suspected to be Fulani herdsmen have allegedly killed 11 persons, including a district head in separate attacks in two Local Government Areas in Southern Kaduna area of Kaduna State.

The Southern Kaduna Peoples Union, an umbrella body of the southern Kaduna people, stated this in a statement on Tuesday in Kaduna.

The union listed the Local Government Areas to include Chikun and Jema’a.

The National Public Relations Officer of the SOKAPU, Mr Luka Binniyat, alleged that the killings occurred between March 26 and 31 March (yesterday).

They alleged that on Tuesday (yesterday), suspected Fulani herdsmen invaded Komo community in Guruku ward in the Chikun Local Government Area of the state, killing not less than six persons.

Besides, it added that on March 30, the suspected Fulani herdsmen shot and killed the District Head of Jagindi, in the Jema’a LGA of the state, Mr Danlami Barde, a retired police officer.

Also killed alongside the traditional ruler, the SOKAPU further alleged, was the monarch’s brother, Mr Musa Barde, while his (Musa) wife survived the attack with a gunshot wound.

The woman, it added was receiving treatment at a hospital in Keffi, Nasarawa State.

The SOKAPU spokesman added that in another attack at Kuduru, a Gbagyi village, also in the Chikun LGA, armed herdsmen struck on March 26 and burnt homes, foodstuff, rustled cows and stole valuables as well as killed three persons while two others escaped with a gunshot injury.

The union gave the names of those allegedly killed as Hassana Bala, Jamilu Hassana and Halima Bala while Haliru Nawela and Kure Dogonyaro were injured.

The statement titled, ‘Killings in Southern Kaduna Continues,’ said, “In spite of the fear that has gripped Kaduna State over this pandemic, armed herdsmen still lurk over Southern Kaduna destroying communities and shedding the blood of innocent persons.

“This afternoon (Tuesday, March 31) Komo community in Guruku ward, in the Chikun LGA came under savage attacks by armed herdsmen. Though SOKAPU has yet to fully identify the victims, not less than six persons have been confirmed killed by the rampaging murderers.

“Yesterday (Monday, March 30), a royal father, the District Head of Jagindi, in the Jema’a Local Government Area, Mr Danlami Barde, was shot dead by armed herdsmen. Barde, who left behind a wife and four children, was a retired policeman before becoming the district head.

“Also killed along with him was his brother, Mr Musa Barde, who also had a wife and three children. The wife of the slain Musa Barde survived gunshot injury and is currently receiving treatment at the hospital in Keffi.

The union called on the federal and state governments to deploy more security to “our ravaged villages and secure lives and property.”

“We also appeal to good spirited individuals and corporate bodies to assist surviving victims with food, shelter and drugs especially at this time of extreme difficulties,” he added.

As of the time of filing this report (8:25pm) the Kaduna State Police Command’s Public Relations Officer, Mohammed Jalige, had yet to confirm the incident.

“I will get back to you later tonight because right now, I am together with the Commissioner of Police, going round to ensure residents’ compliance with the curfew. Please, send a reminder later to me if I didn’t call you,” he said.

There was no response to a reminder sent to his WhatsApp platform by our correspondent.

Also, there was no response to a call and a text message sent to the state Commissioner for Internal Security and Home Affairs, Mr. Samuel Aruwan on the matter.