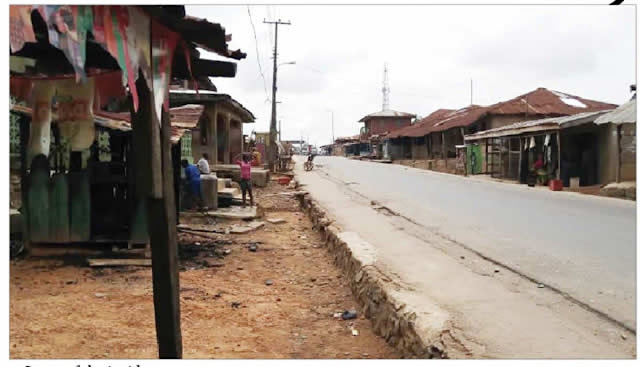 There was drama in the Muslim Odinjo area of the Mapo Local Government Area of Oyo State, on Sunday when hoodlums from Opeyemi and Akatapa communities clashed and left two persons dead in the process.

The deceased persons, who were residents of the communities, were identified simply as Wale and Tunde.

Dove Bulletin learnt that the hoodlums, who were armed with weapons, allegedly took advantage of the tension in the community to burgle shops, destroy and loot property belonging to traders and residents of the communities.

A resident, Basit Alaka, said the tension in the communities started when a resident, identified simply as Deara, allegedly mobilised some hoodlums to the Opeyemi community to arrest his opponents and in the process, picked a yet-to-be-identified victim, who had just returned from a journey.

Alaka said the victim’s brother, after being informed of the development, approached Deara to release his sibling, but the effort proved disastrous and it degenerated into a fight.

He stated, “The disagreement degenerated into a fight and Deara was injured with a cutlass. How Deara was attacked was that the hoodlums he brought into the community were on the street when he entered the Opeyemi community to apprehend the person who just returned from a journey around 9am.

“Around 8.27pm, traders closed their shops early and residents quickly entered their houses, because of the fear of reprisal. Suddenly, we started hearing people shouting. The hoodlums used cutlasses and bottles to attack each other. They also burgled shops and stole property.

“My house is close to the road, so, I witnessed the incident and how they burnt a kiosk and burgled shops. I also heard them saying that Wale was dead and that it was hoodlums from the Opeyemi community who killed him.

“The situation was calmed when the police came; when we stepped out to observe what had happened, I saw that Wale was butchered with cutlasses. We were later told to leave the scene.”

Another resident, Aina Adeshina, said the kiosk that was set ablaze drew the attention of the policemen to the crisis in the community, adding that while the cops were parading the area, Tunde’s corpse was found.

He stated, “Tunde was a taxi driver, who just returned from work. But when he could not find his brother during the clash, he had to go out to look for him and in the process, the hoodlums mistook him for his brother, attacked and killed him. He was slaughtered by hoodlums from the Akatapa community.

“Over 15 shops were destroyed during the clash. Drinks were taken from some shops, broken and the bottles used as weapons during the clash. Some of the hoodlums were shouting that there would be reprisals; residents are now scared and tired of the activities of these hoodlums.”

When contacted, the Police Public Relations Officer in the state, Gbenga Fadeyi, said two persons were killed during the clash, adding that the Commissioner of Police, Shina Olukolu, had ordered the transfer of the case to the State Criminal Investigation and Intelligence Department for further investigation.

Fadeyi said, “The cause of the fight, which happened around 10pm, is not known. But when the youth from the Opeyemi and Akatapa communities were attacking each other, information got to the police that they were fighting at Akatapa along Idiaro, so we deployed our patrol vehicles in the scene and on getting there, those who were fighting ran in different directions.

“But giving them a hot chase, the policemen sighted a kiosk that they had already set ablaze and in an attempt to extinguish the fire, the police got information that there was a corpse not far from where they were.

“While recovering the corpse, we got information that another dead body had been found. So, in the course of attacking each other, two persons were killed. The corpses were taken to the mortuary. The case has been transferred to the SCIID for the discreet investigation to unravel the cause of the fight.”