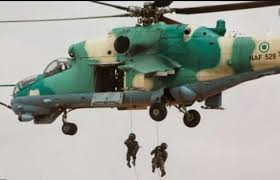 The Air Task Force of the Operation Lafiya Dole has killed several Boko Haram fighters in the heart of the Sambisa Forest in an interdiction mission in Borno State.

In a statement by the Coordinator Defence Media Operations, Major General John Enenche, the operation followed diligent intelligence that confirmed that they were makeshift structures used by the terrorists as logistics base.

According to the statement: “The Armed Forces of Nigeria, through the Air Task Force of Operation LAFIYA DOLE, has neutralized several Boko Haram Terrorists (BHTs) and destroyed a logistics facility within the heart of the Sambisa Forest in Borno State. This was achieved in an air interdiction mission executed on 16 April 2020 as part of ongoing operations to destroy the terrorists’ capabilities before they can be brought to bear against land forces and other targets.

“The airstrike was conducted after series of day and night Intelligence, Surveillance and Reconnaissance (ISR) missions confirmed that makeshift structures, hidden under the dense vegetation of the area, were being used by the terrorists to store their logistics as well as house their fighters. Consequently, the Air Task Force dispatched its fighter jets to attack the hideout, leading to the destruction of some of the structures as well as the killing of several terrorists. Post-strike battle damage assessment showed the logistics facility engulfed in flames.

“The Armed Forces of Nigeria, in furtherance of the objective of restoring peace and security in the North East, will sustain the offensive against the enemies of our Nation”.