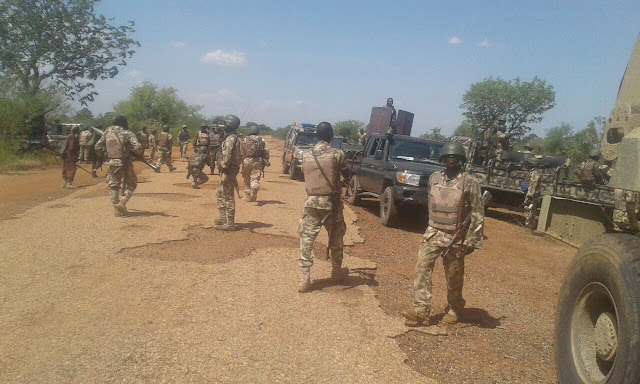 The Nigerian troops fighting in the northeast region, on Wednesday, killed 9 Boko Haram terrorists in an ambush along the Maiduguri, Damaturu road.

Acting Director Army Public Relation, Col. Sagir Musa, who disclosed this in a statement, said “so far, 9 Boko Haram terrorists lost their lives, two gun trucks mounted with anti aircraft guns have been captured and exploitation is ongoing by the troops. Two soldiers are slightly wounded.”

Dove Bulletin reports that earlier, residents of Maiduguri were thrown into panic following two large sounds of explosion along the Maiduguri Airport road.

However, the military said it was military vehicles heading for the battle with terrorists who are attempting to make an inroad into Maiduguri.

The Army said troops of Sector 1, Operation LAFIYA DOLE have successfully staged an ambush at identified Boko Haram terrorists’ crossing point at Mainok-Jakana axis in Kaga local government area of Borno State at about 1830 hours on the 13th of May 2020.

“The ambush was another success for the Nigerian troops against the bad element,” Sagir said.