The government cited the need to protect the vulnerable and halt the spread of the virus in communities as reasons.

Besides, the government is worried about the rising cases of the virus pandemic in the country.

PTF chair Boss Mustapha said: “Nigeria witnessed a spike in number of confirmed cases when the number of recorded cases jumped to 663 on June 9. This number gives us cause for concern as a Task Force and as a nation.

“The PTF will re-emphasize its appeal to governments at the sub-national level as well as our security agencies to enforce the guidelines and protocols firmly.

“The PTF would also be meeting with the heads of these agencies to further fine-tune strategies to ensure compliance,” he added.

“We must ensure that our goal is to stay alive and remain COVID-19 free.”

Mustapha described school resumption as delicate since Nigeria had entered the phase of community spread of the virus.

He said Nigeria should pursue a strategy that will aid the sustainable control of the spread of the disease, adding that communications and community engagement should remain top priority, while precision approach to containment and management should be adopted.

He said the PTF had put in place measures to fight against COVID-19, including the application of science and data to guide the targeting of areas of on-going high transmission, mobilisation of all resources at State and Local Government levels to create public awareness on COVID 19 and improve compliance with non-pharmaceutical interventions within communities and sustenance of key non-pharmaceutical interventions that would apply nationwide and include among others.

Mustapha spoke during the daily briefing by the PTF in Abuja.

Also on Thursday, PTF Coordinator Dr. Sani Aliyu, said Nigerians had not reached the peack of infections. He described the fight against the virus pandemic as long-drawn.

Dr Aliyu added that the decision to restrict gathering in churches and mosques was because most of those who got to places of worship are those within the vulnerable group of Nigerians who may have underlying illnesses.

He said the PTF was working closely with the Ministry of Education to work out a resumption plan for schools since majority of students may be living with the vulnerable group of Nigerians.

He said the plan may be to allow those who are supposed to write examination to do so, saying “we don’t want what has happened to affect the next academic session”.

He said 20 per cent of Nigerian have underlying ailment, adding that the government had a responsibility to protect them against infection, hence the suggestion by government for people to stay at home.

He said the global epicenter of the pandemic had shifted from China to Europe, then to the United States and is now showing significant impact in South and Central America.

He said the shift to South America with virtually similar climatic and demographic similarities with Africa, is a cause for concern considering the earlier projections pointed to Africa as likely to be the worst-hit continent.

Mustapha said over 800 frontline health workers involved in the COVID-19 fight had been infested by the virus.

He said: “It is the consideration of the PTF that while Nigeria’s confirmed cases have increased in the period under review, majority of the confirmed cases have been found to be in a handful of local governments in the country, adding that 20 out of the 774 LGAs nationwide account for 60% of the cases with Lagos accounting for 11. 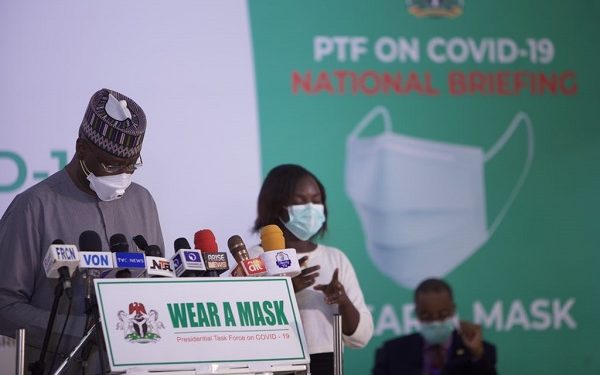