Five killed, many injured as trailer crashes in Suleja

By Funso Adekitan June 14, 2020
Three women and two girls were killed while a dozen others were injured as a trailer falls off a cliff in Suleja Local Government Area of Niger state.

The trailer which was carrying iron rods and passengers was said to be coming from Lagos state but its destination remains unknown.

The incident occurred around Kona Ayaba in Sabon Kaida around Lambatta area.

Dove Bulletin gathered that due to the weight of iron rods and individual, the trailer lost control when trying to climb an ascending hill.

The Suleja Federal Road Safety Corps (FRSC) Route Commander, Babatunde Onemola told The Nation that the crash occurred at about 11.40 am on Saturday saying that the Corps began rescue immediately they got the call about the crash.

He explained that the trailer with registration number UGG485XA was coming from Lagos adding that the weight of the iron rod made it impossible for it to climb the ascending road which made it to lose control and fall off the cliff.

The FRSC Route Commander said that the corpses have been deposited in the Sabon Wuse general hospital while the injured victims were taken to Federal Medical Center, Gawu Babangida and are currently receiving treatment. 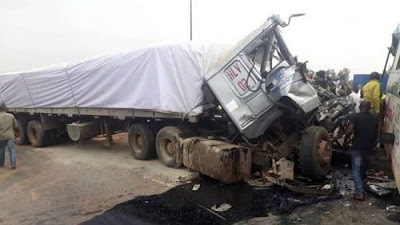