How to enjoy s3x after childbirth 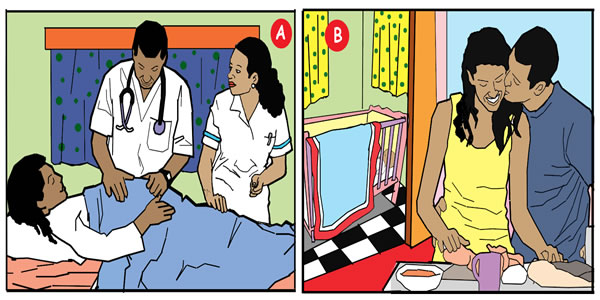 S3x after childbirth can be scary for many women; even though childbirth makes them have all it takes to make their husbands want more sex on mere sighting them; talk of larger (milk-filled) breasts and pointed nipples. It is even for this reason that some men ‘compete for’ or ‘alternate’ the breasts with their new babies.

Although sexual intercourse is not encouraged until six weeks after, for those who had a normal delivery, to allow the body heal faster and avoid likely infections, some men have often described such women as more attractive. But those might not be enough to boost the confidence and preparedness of some women to resume sexual activities with their husbands, and the fears may not be misplaced after all.

For those who had a normal delivery, some tend to be apprehensive of what their partners would think of what has become of their body, largely because of their fatigued and ‘loose body.’ Coupled with exhaustion and other things that could take their minds away from going for another romp in the sack, it is not uncommon to see that some couples’ sex lives derail after childbirth.

And on the other hand, for those who had Caesarean Section, the pain may not abate quickly, which makes sex somewhat painful. Even though the tightness of the vagina is retained when a woman gives birth through CS, which is the reason why some men encourage their wives to go through the operation to avoid having a loose vagina afterwards, studies have however shown that sex may become more painful for such couples after childbirth until it heals completely. Thus, such women shy away from it for some time.

Impliedly, whether the delivery was done through normal delivery, use of some equipment, through CS or there was episiotomy, which is a surgical cut made at the opening of the vagina during childbirth to widen the passage for easy delivery and prevent rupture of tissues, there is usually the possibility of a cut, tear or scar at the end of the exercise, which could dampen couples’ sex lives. But there is a way out.

For women who had CS, one good way to enjoy sex after childbirth and avoid nightmarish experiences would be to explore extensive foreplay or adopt other sex positions apart from the missionary style so as not to put too much pressure on the pain until it heals.

According to a popular nurse and sexual health expert, Samantha Evans, “Pressure on the wound arising from CS can cause pain, while some loss of sensation around the wound can also occur, making it sensitive to touch. Therefore these women should avoid sexual positions which exert pressure on their abdomens and over the wound site.”

And apart from using helpful sexual positions, experts have advised foreplay, which can take both parties to orgasm without any penile intercourse. Medical experts have pointed out that the stimulation of the glans (the rounded part forming the end of the penis) can make men ejaculate, and the stimulation of the clitoris or the nipples can take women to their own destination.

Thankfully, previous studies, as earlier discussed on this page, have shown that a significant number of women don’t reach orgasm through penetrative sex, but through the stimulation of such vital parts.

According to a consultant endocrinologist, Dr. Olamoyegun Michael, couples can still have an exciting sexual experience after childbirth because, physiologically, childbirth does not affect sexual performance in women.

He said if there was no problem at delivery and there were no injuries, there should be no reason for any reduced libido or enjoyment of sex and couples can enjoy sex after delivery, as much as they did before the pregnancy.

In fact, he said such women tend to experience increased vaginal secretion, which is key in sexual enjoyment, and that if there is dryness at all, it is possibly because there is no enough stimulation. Thus, the man should engage the woman in extensive foreplay so she could be wet.

Be that as it may, Olamoyegun cautioned that whether such women would enjoy sex or the extent to which they would depend on the circumstances surrounding the delivery.

He explained, “If at delivery, the child was too big, or the child was in an abnormal position, making the delivery difficult and she sustains an injury, or the woman was given an episiotomy, which is a surgical cut made at the opening of the vagina during childbirth to expand it, and she had a tear or injury, if it is not allowed to heal very well, she may end up in pains and that can reduce her libido. It is called dyspareunia, meaning difficult or painful sexual intercourse.

“If it was episiotomy and it was done by a competent professional and it was well sutured (a stitch or row of stitches holding together the edges of a wound or surgical incision), and they allow it to heal very well before they start having sex, there shouldn’t be any problem. They can have a good sex life afterwards. But, there will be a problem if it didn’t heal very well or if it wasn’t well done.

“For example, the stitching may narrow the birth canal (vagina), and it may cause pain during sex. If they have a problem and they feel the woman’s vagina is tighter than how it should be, she would need to see a competent professional like an obstetrician gynaecologists, who could dilate it; make it wider, and find a way to correct or expand it.

“Beyond these, during sex after childbirth, the husband needs to be gentle with the wife, especially during penetration. Such women will need to relax and there is a need for significant foreplay so she could be wet to avoid pain during penetration.”

From findings, a loose vagina is a common experience after normal childbirth, and it is a major turn-off for men. So, on what is the way out, Olamoyegun has this to say.

“There are various forms of exercise that can be done to tighten the vagina wall if it is loose and one of such is pelvic floor exercise, also known as Kegel exercise, which helps to tighten the muscle around the vagina. And it works, but if that is not very effective, there are other procedures to tighten it.”

He said without exercise, the vagina can still firm up with time but it may not be very effective and it will take a longer time. So, for a tighter vagina, which is key in sexual enjoyment, women should take up such exercises.

But even when all these have been taken care of, it is not uncommon to see couples having difficulty with their post-partum sex life. According to Olamoyegun, this is due to some social factors that can be addressed.

He said, “Women usually add weight during pregnancy and most women don’t shed that weight after delivery, so they might not be as pretty and attractive to their husbands as they used to be. It may reduce the number of times they have sex, and that is why such women are advised to do some exercises.

“Also, some women shift their attention from the men to the child, so, they don’t have time for sex neither do they have time to look attractive for their husbands, which can lessen the interest of the man in the woman. The fear of pregnancy is also there and it is more so for those who are not interested in family planning. These are social factors, and if they are taken care of, there is no reason why there will be a decrease in sexual drive.”