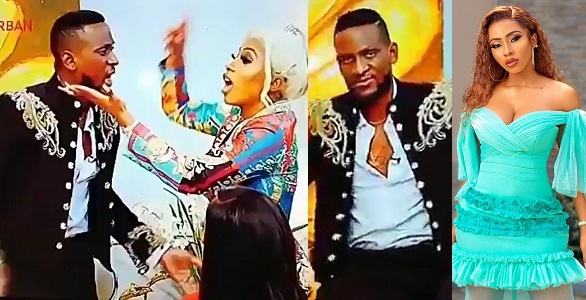 Former Big Brother housemate, Omashola is currently being lauded online for being a gentleman after he was physically assaulted by his female colleague, Mercy during the reality TV show’s reunion edition.

In a video that’s currently making the rounds online, Omashola and Mercy are seen having a heated exchange as they confront each other, exchanging enough droplets from their mouths without the fear of Corona.

According to reports surrounding the video, Omashola had referred to the BBN: Pepper Dem winner as a prostitute which is what instigated the whole drama before she shoved him away.

Although he’s been lauded for not being triggered to physically retaliate and being a gentleman about it as he even apologized to Mercy, he however has been reprimanded for referring to Mercy with such derogatory term.

After she shoved Omashola, other housemates rushed to the scene to intervene so it won’t escalate any further, although they kept on shouting at each other.

The show’s host, Ebuka, on the other hand is seen keeping his calm as he looks unperturbed with the drama going on beside him.

Watch the video below,