By Funso Adekitan June 12, 2020
A pressure group within the ruling All Progressives Congress (APC), Ondo APC Mandate Group (OAMG), has threatened to work against the party should the party give Governor Oluwarotimi Akeredolu second term ticket in view of an array of anti-party allegations against him.

Addressing newsmen at the APC National Secretariat in Abuja on Friday the convener of the group, Comrade Olugbenga Bojuwomi alleged that the governor’s of anti-party activities was responsible for President Muhammadu Buhari defeat in the state during the 2019 general elections.

Bojuwomi warned that a ticket for Akeredolu will spell doom for the party at the November 10 Ondo State Governorship election, saying “the party should forget the state if Akeredolu should clinch the party’s ticket”.

“If the party eventually feature Akeredeolu as the sole candidate after the July primaries, we the APC members in Ondo will are to do our own anti-party activities by campaigning against the APC during the election. APC should just forget Ondo state if the party rewards Akeredeolu’s disloyalty because what it means is that disloyalty pays.

“It is wrong to think that the state Assembly members purchasing form for him speak volume of his support.”

Reacting to the purchase of nomination form for the governor by the members' state legislature the group argued, “We all know how legislators work in this country. The situation is the same in the state. They are always the governors’ stooge and where he is going, they go. They are rubber-stamp legislators. Whatever comes from them is not funny because they are just performing their bid.”

The group alleged that during the 2019 general elections, the governor through the Action Alliance (AA) fielded candidates which led to the defeat of APC in Ondo state.

Bojuwomi complained that a video earlier sent to the national headquarters and the presidency of the governor and one Ade Adetimehin who were captured during the campaign for their anointed party Action Alliance (AA) at the detriment of APC in 2019 was not attended to.

It further accused the governor of being responsible for the recent political tension in the state. According to the group, “The pocket of violence which was sponsored by governor Akeredolu where his thugs machete loyal APC members which occurred before the general election in Owo his home town has just resurfaced last week.

“One of the campaign vehicles belonging to one of the foremost gubernatorial aspirants, Chief Olaide Adelami was destroyed with bullets and Machete by Akeredolu’s killers' squad/cultists which has already been set up by Mr. Governor to intimidate any perceived opposition to his re-election bid”.

But in a swift reaction to allegations by the group, Ondo state Deputy Speaker, Rt. Hon. Adeboboye Samuel, who led a group to purchase the nomination form for the governor said, “Talking about anti-party, the governor ever never visit any ground to campaign for anybody. He has no right to stop those that contested under the platform of AA.”

Samuel argued that Akeredolu had no power to stop those who contested against APC in Ondo state during the presidential election.

“I am glad you claimed that the allegation came from a group of people. In actual fact, there is no factionalisation within the APC in Ondo State. But if you are talking about pressure groups you can’t divorce from politics. They are the people who will always want to terrorise the governor,” the lawmaker stated. 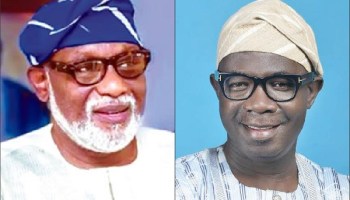