The accident which occurred around 5.15pm on Friday, involved a Mecedez tipper loaded with sand and a 608 bus, with 19 persons on board. 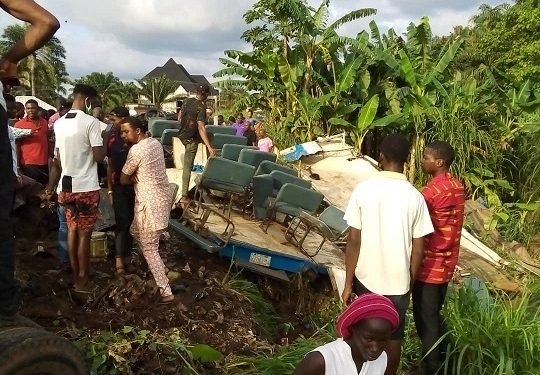 The Nation gathered that the bus was conveying one kindred from the area to a burial ceremony when it collided with the sand loaded tipper lorry.

An eye witness who put the number of casualties at seven, said the tipper had a tyre burst, resulting to loss of control and subsequently rammed into the bus.

He said, “No fewer than seven persons died on the spot while other passengers sustained degrees of injuries.

“Most of them were members of the same family going for a burial ceremony.

Confirming the incident, Sector Public Education Officer, Federal Road Safety Corps, Pascal Anigbo said the corpses had been deposited at the hospital morgue, while the injured were receiving treatment.

He said, “At about 5.20pm on Friday 12 June, 2020 we received a distress call on a fatal Road Traffic Crash (RTC) which occurred at about 5.15pm near Buckie Polytechnic, along Ogidi-Abatete road. FRSC rescue team from Nteje Unit Command were immediately dispatched to the scene of the crash. 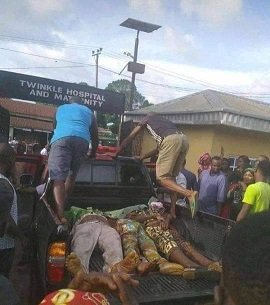 “The crash involved a Mercedes Benz 608 with registration number AA205DMA driven by one Ezeugwu Christopher and a Mercedes Benz Tipper with enlistment number XD651GDD, drivers name given as FC Ugwumba.

“Casualties involved included, Seventeen (17) adult males, One (1) female adult and One (1) female child. Totalling Nineteen (19).They were all rushed to Twinkle Hospital, Ogidi by members of the community.

“The Sector Commander FRSC, Andrew Kumapayi condole with the family of the deceased and wishes the injured victims quick recovery, warning vehicle owners and drivers against the use of expired or worn-out tyres, particularly during rainy season.

“He equally advises that only brand new tyres should be used in vehicles as most fairly used tyres, popularly called “tokumbo tyres” are expired. 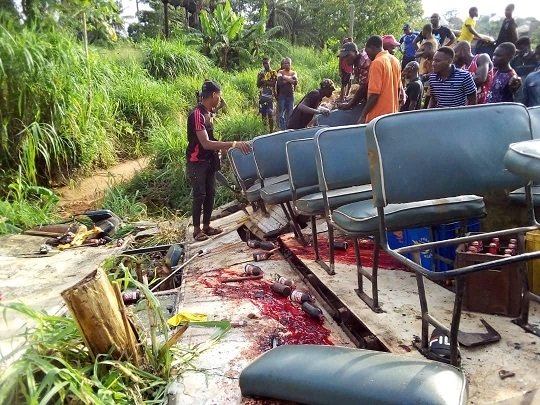