BBNaija 2020: Erica under fire for having sex with Kiddwaya on national TV 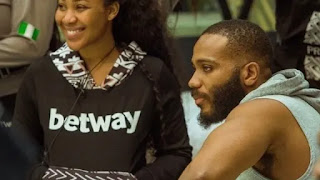 Dove Bulletin recalls that Erica had on Wednesday night confirmed to Neo that she had sex and would be ashamed to watch her videos with Kiddwaya in the HOH room when she’s out of the house.

This stirred reactions from Maduagwu, who described Erica as being ‘cheap’ and shameless.

According to him, Erica is a big disgrace and should be evicted from the BBNaija show.

Maduagwu, however, claimed that the Abia-born housemate convinced Kiddwaya to have sex with her in order to get pregnant for him.

Maduagwu posted on Instagram on Thursday: “Having sex in public is shameless, but having the boldness to saying it out is Cheap. Even roadside prostitute on #Allen will never stoop so low to having sex with their client in public.

“#Erica is a big disgrace and should be evicted from #bbnaija2020 its shameless #girls like her that makes people call for #bbnaija ban.

“She has broken the record, among all the irresponsible ex-housemate that once had sex in BBnaija, Erica is the first to brag about it while on the #show, when they tell parents to give their daughters #good home training, they will be watching #telemundo.

“Everyone knows Erica seduced #Kiddwaya to have sex with her in #bbnaija5 because her plan is to get #pregnant for him because of his father billions, why did you think she refused to allow Kiddwaya use a condom?.” 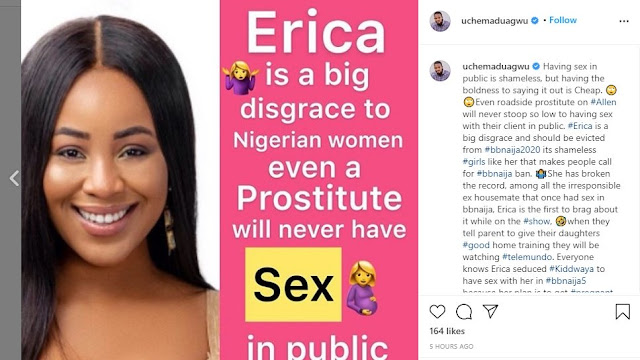