BBNaija 2020: I have brains more than you – Erica blasts Lucy 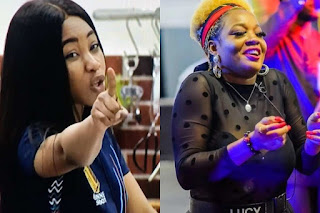 Big Brother Naija housemate, Erica and Lucy engaged each other in a heated argument on Thursday.

The argument started after the Head of House, Erica read the brief for today’s task to the housemates.

Erica chose Lucy to be in her group with Kiddwaya, but Lucy declined.

According to her, she does not want to be in a group with Kiddwaya and Erica because she would lose.

Responding, Erica shouted at Lucy to stop being disrespectful and stop bringing out bad energy every time.

“Every time, it is always a problem about you, nobody even wants you in their group. You’re such a bad energy.

“I have brains more than you, so shut up. I would not condone your attitude. If it was Big Brother that divided us into groups, would you reject? Nonsense!”

Mummy Lucy cannot relate with human beings on a healthy level, I bet her staff turnover for her grilling business will be very high, she will be sacking people anyhow.

In all of this Kiddwaya doesn’t want any strike sha for Erica!!!