Chelsea has a huge list of players in their squad after a busy transfer window. The Blues were on a spending spree signing fresh recruits to Stamford Bridge. Frank Lampard was even able to land his dream signing Kai Havertz. But now the Blues have to free up space in their squad.

Transfer expert Ian McGarry feels that Lampard will follow Mourinho’s tactics. Jose Mourinho plays with a selective set of players who he plays in and out. Lampard currently has an oversized squad and has to trim it down. This will allow him to rotate around with his stars and keep them up and running. Frank does not want any bench warmers in his squad.

Also, Chelsea has spent £200M surplus of new signings alone so far. After spending this lot od money, we can’t expect Chelsea to offload some stars. Hence, as per reports, Lampard is willing to sell Kante. The Frenchman has been a key member of the Blues lineup. But it seems as though he may leave this summer.
Chelsea are planning to make Kante available in the market.

N’golo Kante has a formidable reputation for himself. As a result, Manchester United and Inter Milan have already shown their interest in him. While Milan has to dump Christian Eriksen first to make the signing. United can make the swoop once Chelsea makes him available in the market, via Daily Mail. So Kante may soon bid adieu from Stamford Bridge in the coming weeks.

The Frenchman is in no hurry to leave Chelsea. The midfield ace is more than comfortable at Stamford Bridge. Kante also has around three years left in his contract and is hoping to continue in England. But with Chelsea keen to cut down their team, Kante may have to depart.

“I think Frank is keen to trim the squad and make sure he’s not got people hanging about as ‘bodies’.” Ian McGarry on Transfer Window podcast.

Ian McGarry also feels this is a necessary move. Chelsea has just spent over £200m to sign new stars. Hence, they will have to ship some players soon. Also, he hits that Lampard also follows the Mourinho way. Jose also was not happy to have an oversize squad. Having a lot of players in the same position will only make more confusion.

Initially, Real Madrid did express their interest in the Frenchman. But Los Blancos did not have the spare money to fund huge signings this term. United and Milan are keeping a close eye to make a swoop. Manchester United may get a boost if Kante looks to continue in England. Also with the red devils put away their interest in Jadon Sancho, they may be able to fund the move.

Lampard can also opt to sell Jorginho and keep Kante. The Italian was not seen much on the field under Lampard. Hence, the Blues may choose to sell him instead along with more defensive players. Chelsea is still targeting a goalkeeper ahead of the new campaign. They will surely have to sell some players before they make any more signings.

Marina Granovskaia was finally able to seal a deal on Kai Havertz. The German international is now officially a Chelsea player until 2025. The Blues were able to sign him on a £71m plus add-on deal. The west London side has now landed six new recruits this summer.

Timo Werner and Hakim Ziyech were their early signings. Following which, Ben Chilwell and Kai Havertz have come in in the past weeks. Malang Sarr and Thiago Silva came in on a free transfer to bolster their defence. So far business has been great for the Blues. Lampard has all of his dream targets under his belt.

Chelsea has a strong lineup ahead of the 2020-21 season. Lampard was able to finish fourth in the last campaign. They will be a title competitive squad for the next one. The Blues are in to win the league with their fresh arrivals. 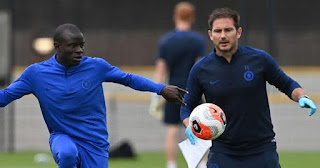