Chelsea have identified Sergio Romero as a potential option to strengthen their goalkeeping department ahead of next season, The Athletic reports.

The Spaniard managed only a save percentage of 54.5 in the league and that was the worst for any goalkeeper, who had made more than 10 starts.

Rennes' Edouard Mendy has been on the Blues' radar over the past few weeks, but they have failed to strike an agreement with the French side.

Their initial bid of around £15m was rejected last month and reports claim that the Ligue 1 club want more than £30m for their keeper.

Hence, Romero seems to have emerged as an alternative target and he could be available for a much lesser fee than Mendy this summer.

Romero is currently the third-choice goalkeeper at United with David de Gea and Dean Henderson ahead of him, and he is expected to move on.

He is valued at around £10m and could provide adequate competition to Kepa, who is determined to fight for his position next term. 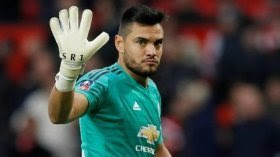