Ole Gunnar Solskjaer has called Dean Henderson a "proper Manchester United goalkeeper" ahead of his big decision next week.

There is huge debate over who should be the No 1 at Old Trafford ahead of the new season.

United host Crystal Palace next week and Solskjaer must decide whether to start Henderson or David de Gea in goal.

The Spaniard has been the club's first choice shot stopper for almost a decade but has made several glaring errors over the past 18 months.

Nevertheless he has retained the confidence of his manager, who now has a genuine contender to replace De Gea.

And his comments after United's pre-season defeat to Aston Villa suggest a switch could be on his mind.

"There were some positives," the Norwegian told MUTV.

"I thought Deano showed his authority back there and he played like a proper Man United goalkeeper.

"Donny was maybe the biggest plus in the outfield. He's such a finder of space and he creates time for himself with his timing and movement.

"I was very happy with his performance."

Henderson has previously said he doesn't have any interest in playing second fiddle to De Gea.

He signed a new long-term deal recently which eludes to a lengthy future in Manchester.

He said: "The idea that Dean Henderson would come into Manchester United and replace David de Gea as No1 goalkeeper straight away… it won't happen, I can guarantee it won't happen.

"This has got 'problem' written all over it. The one area of the pitch where you need consistency and stability is your goalkeeper, you need to know who your No1 is, you cannot be flip-flopping.

"It just does not work. I've never seen it work at any club or at international level.

"Where there is a decision to be made about two goalkeepers you have to pick your No1, go with him and stick with him, even if there is a mistake." 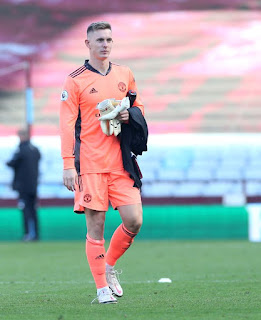