Rio Ferdinand believes Mason Greenwood is a 'superstar in the making' and described the teenage Manchester United forward as a 'textbook goalscorer.'

The 18-year-old burst onto the scene last season at Old Trafford, scoring 19 goals during his first campaign with Ole Gunnar Solskjaer's senior squad.

But he was then sent home in disgrace after breaching Covid-19 protocols by sneaking two girls into the England team hotel.

However, United legend Ferdinand is confident Greenwood will go on to accomplish plenty in the game.

He told BBC Radio 5 Live: 'There's no doubt in my mind that this kid is going to be here to stay. He's here for the longevity.

'He's a superstar in the making. I don't want to add too much pressure [on] to him but the kid, in terms of natural born goalscorers, is the way if you were writing a textbook.

'He plays it the right way. He excited me massively.'

Greenwood has been forced to train away from the rest of the United team as a precaution until he returns negative coronavirus tests and he won't be involved in this weekend's friendly against Aston Villa.

United begin their Premier League season a week later than most of the other teams following their run to the Europa League semi-finals last month.

Meanwhile, former England defender Ferdinand believes Jadon Sancho would be a superb addition to the United side.

There have been suggestions in recent days that United's pursuit of the Borussia Dortmund man is still going.

'I think you have to look at it and think to yourself Jadon Sancho is someone who adds a lot of goals, a lot of assists, creativity,' said Ferdinand.

'He draws players out of position. You need two or three players to come deal with him, which now allows other people like [Marcus] Rashford, Greenwood and [Anthony] Martial more space and what that means in terms of goals and opportunities - who knows?

'I think he brings you good problems for the manager.' 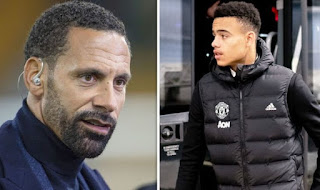