Rihanna got into a nasty electric scooter accident which has left her with some terrible facial injuries. The singer apparently flipped on the scooter and her face is not looking anything like you and I remember.

Everyone knows that in the entertainment industry, looks sell. Some stars would rather lose a limb than have anything happen to their face as it is the money maker.

Dove Bulletin learnt that Rihanna sustained pretty bad injuries to her features as a result of the scooter accident. Reports say that her face is totally bruised and swollen to the point that you’ll have to take a second look to recognise her.

The news took over after photos emerged of the star with what appeared to be bruising and swelling on her face as she sat in a car outside a restaurant in Los Angeles on Friday.

Entertainment websites People and TMZ reported that Rihanna was involved in an accident on an electric scooter and her face got smashed. Apparently the injuries look worse than they actually are and Rihanna will make a full recovery in no time, according to the report.

In a statement to People, the singer’s representative said she was “healing quickly” and that her face wouldn’t have any permanent damage.

“Rihanna is completely fine now but flipped over on an electric scooter last week and bruised her forehead and face. Luckily there were no major injuries and she is healing quickly.” 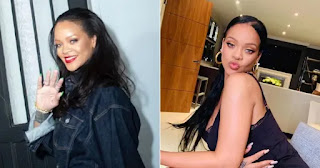