Manchester United could reportedly end their pursuit of Real Madrid ace Sergio Reguilon due to the La Liga outfit’s demands.

United boss Ole Gunnar Solskjaer had been linked with a move for the left-back, who spent last season on loan at Sevilla.

Luke Shaw and Brandon Williams impressed at times last season though Shaw has previously come under heavy criticism during his time at Old Trafford.

Real Madrid are reportedly willing to listen to offers in the region of £27m for Reguilon with Zinedine Zidan having Marcelo and Ferland Mendy ahead of him in the pecking order.

United are believed have a stronger chance of signing Reguilon, 23, than Sevilla due to the Red Devils’ financial power.

But Estadio Deportivo claim Real still rate the left-back highly and would want to include a buyback option or a sell-on clause.

The report adds that United are unlikely to agree to those terms and could now end their pursuit.

Manchester United made their first move of the summer transfer window as Donny van de Beek headed to Old Trafford from Ajax.

Solskjaer had said of his transfer business: “I cannot say when or if transfers will be done but we are looking at it and we’ll have to sit down because it’s a quick turnaround.

“We’ve got to be 100 per cent sure when we make those deals. It’s going to be a strange summer.

“We’ve only got a couple weeks away from each other until we get going again. That’s going to be a mental challenge.

“Of course, we’ll keep pushing and keep demanding more of players we have but we’re looking to improve.

“It’s a strange one. The league starts very quickly but the market’s open for so long. We’ve got to be good smart and clever.

“We definitely need to improve if you want to move up the table and take steps further in the cups.” 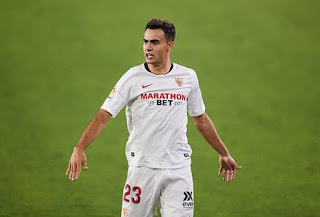