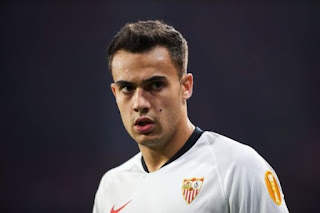 According to Spanish media portal Marca, defending Spanish La Liga champions Real Madrid are set to make a decision on the future of Sergio Reguilon at the club amidst the interest from Premier League clubs.

Arsenal and Manchester United are said to be interested in the left-back who’s not in the plans of manager Zinedine Zidane.

Sergio Reguilon spent the whole of last season on loan at Sevilla and he made his mark by helping the Spanish team win the Europa League. He played in the final match of the competition which ended in a 3-2 win for Sevilla.

His stock has risen as a result of the performances for Sevilla and that has led to the interest from Premier League sides.

Chelsea were seriously linked with him before the Blues decided to sign Ben Chilwell from fellow English side Leicester City for an initial fee of £50m.

Manchester United are also keen on the player though the likes of Luke Shaw and Brandon Williams are established in the left-back position at the club.