United agree on deal for Romero

Manchester United FC have recently handed over Dean Henderson a new contract, which will keep him at Old Trafford till 2025. With his long-term contract, the future of Sergio Romero at Old Trafford is pretty grim, as reported earlier. It is now being reported by Marca that Aston Villa and Manchester United have agreed on an €8m deal for Sergio Romero.

It was earlier reported that Sergio Romero was linked with Aston Villa and a move was imminent for the veteran Argentine. The goalkeeper has been used as a back-up to De Gea for the entirety of his United career and has never challenged for the No.1 spot. Reportedly, Romero has been unhappy at United since last season, especially with manager Solskjaer.

Romero was pretty impressive last season, but Henderson’s arrival closed all doors for Romero’s United future. It is being reported that United have accepted Aston Villa’s €8m bid for Romero and soon things will become official. This might probably be Romero’s last contract in Europa as the 33-year old has reached the twilight of his career.

The Red Devils could sell some other players too, to generate funds for signing a centre-back and a striker, which are their priorities this summer. 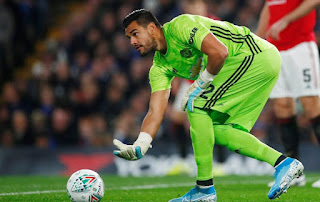